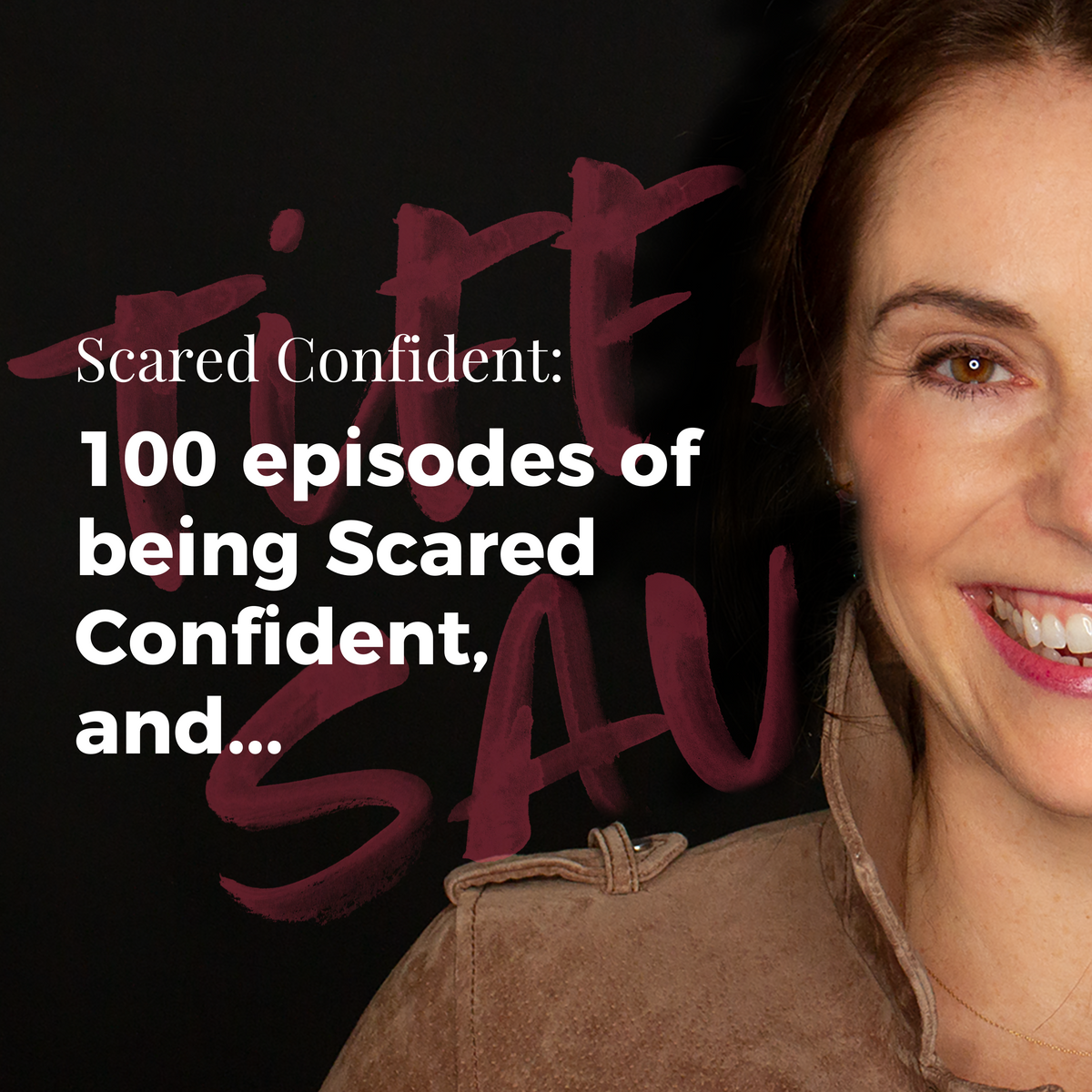 100 episodes of being Scared Confident, and...

100 episodes. 100 conversations on fear and love and parenthood and leadership and homemaking. And...this is just the beginning. Thank you for joining Tiffany for 100 episodes of Scared Confident. In this episode, she reflects on how she has grown throughout her Scared Confident journey, and what comes next for her and for the podcast.

100 conversations on fear and love and parenthood and leadership and homemaking.

And...this is just the beginning. Thank you for joining Tiffany for 100 episodes of Scared Confident. In this episode, she reflects on how she has grown throughout her Scared Confident journey, and what comes next for her and for the podcast.

Tiffany: I'm your host, Tiffany Sauder. And this is Scared Confident.

So this is the 100th episode. I don't even know that I imagined I'd get here, but here we are. And I feel very excited about that. And as I look forward into the podcasts and content is going to be about sharing. What are the truths? What are the principles and what are the systems that can help you individually, as you begin to collect your life of AMS?

It's my hope that the things I've learned, the people I've met, my friends, the kitchen tips that I know that can help you more gracefully step into a life that you love.

I think I knew, I didn't know totally what I was doing, but that the only way I was going to figure it out was by beginning. I think one of the greatest surprises in the process is that. Creating content. Like this is a process of discovery where I imagined it was more a process of like publishing where it was like, these are the things I know to be true, and I'm going to get on the microphone.

And that is my way of publishing the thing that I already know. And I think what's been really kind of a sweet surprise in it. It's been a rich process of discovery. I discovered a lot about myself. It's been maybe one of the most liberating things in my adult life to have the language of, I am for others.

This really crisp articulation of who I am and not simply just the roles that I play in life, but to really have a clear, crisp understanding of the most inside core of who I am, it's given me much direction in my life. And I don't know that from the outside much has actually changed in some places it's just given.

Uh, certainty and a confidence in places I intuitively chose so that I can articulate more clearly to myself that, yeah, I really does fit. And I think it's given me a more confident ownership in places, in my decisions as well. You know, when your podcast is titled scared, confident you find yourself weaving in this thread of wanting to understand what fear says to other people.

And I think for me, it's given me. Really, um, vulnerable starting point to talk to people about fear, where as I walked the planet, you know, the 40 years before that you would hope that you conversations, evolve to a place where you could get really real with people. But when your starting point is scared, confident, I think understanding how ubiquitous fear.

In grownups. Cause like, as a kid, you imagine a grown ups are like complete human beings that are totally evolved and know who they are. And they don't experience like Auggie men, but we very much do. And so there was something about that was just like annoying to me that I was an adult and all of that stuff hadn't been worked out.

And so I think the thing that's been a surprise is to be able to ask people like, what is your greatest fear? Feel them. Pretty introspectively in that calm conversation and to normalize the sense that we all have it. And if we have the courage to name it and know it and to understand then on the other side, what fear is trying to quiet in us?

Like what happens when we all stepped through that? Having clarity in my own. Fierce statement of I am for others. The way that that's impacted my life is I think one really clear one is buying, share your genius, the company that produces this podcast. I don't believe I would have had the courage to say those words out loud.

I think they would have totally come to my mind. I think I would have like, felt that that was an idea, but I think the courage to step into those words. Was completely fueled by the clarity of, this is a way that I can live out being for others. And honestly, the confidence at element three to like step out of roles, to create space for my leaders to lead and to understand part of the way that I'm for others is to like create opportunity and give them a chance to grow and do hard things.

And think when you make something. It can feel really good to hang on to it in particular when it's doing well. And so having the courage to leave some room, um, I've also had some opportunities over the last year to step really clearly into some leadership roles on some boards that I serve on. And it was a thing for my brain to lead my.

Where they didn't, you know, on those boards, they're all CEOs. They didn't like join that board saying I want to work for Tiffany. And as I began to be asked by my peers to take on some leadership roles, I think that like courage that I have to step into those came faster, knowing it's part of the way that I serve.

Self-conscious and using those, but to step in and say like, yeah, that's something I know how to do. I've been practicing that for a long time so that when those skills are needed, I can be at the right. And so again, it's not about like glorifying my talents. It's about saying this is part of what it takes for a group of people with a lot of different talents to come together and do something spectacular and being willing to use my talents, even when it's not convenient, because it rarely is, um, has been another way that I think knowing who I am has helped me step more clearly into roles that I've been asked to.

In hindsight, what I was trying to do with the podcast, maybe some people are wise enough to see this stuff in the horizon. I feel like I can only see it in the rear view mirror, in my journey as a professional, I was element three CEO. That was my core identity professionally, and it became a core part of my identity as a person in summit.

Served the journey, I would say, because I worked harder than I knew I could, but some of that did not serve me well, because my identity was so wrapped up in the role that I was playing. And so I felt like I had worked through the process of disconnecting my identity from being element three CEO, but I didn't know what to replace that with.

As I looked into the next. Version of my life that included a kid I hadn't planned on at a time in my life. I hadn't planned on my husband and a new job, this post pandemic world, like this idea of like everything sort of, as I knew, it changed in a period of six to 12 months. And so I think part of this intuitive journey of saying like, I need to do a podcast, it seems so odd to need to like, just get a journal, Tiffany.

I dunno, but I did this instead. I just, I think I needed to work out what do I do next? Like, how do I make good decisions next? And fear was loud. And I knew that was unproductive, but I didn't know what to replace it with. And so, I mean, this idea of the fear journey was not even really burst before we started this.

Like, it seems like. Silly that I would have made any of these decisions to move forward without knowing what the next page was going to say. But it just trusted that somehow I would know where to go next. If I just kept stepping into what felt hard,

I think next is beginning to pick up the pieces of my story and to put them into story. Not that I'm a finished product by any stretch. But I do know that there are some things that I have discovered that have been intensely liberating to me. And so to the extent that I can pick through my past and understand the things that have served me to have a really productive today, how do I, how do you get there in a way where you arrive and you have a peaceful love for your life.

And I think that that's what we are all wanting is to know. Is it going to be worth it? And how do I, how do each of us make decisions in a way that we get to there, wherever that is and say like peacefully, it was totally worth it. How do I help others passionately live a sustainable life of, and because that is my greatest joy is to have a life with so many different ans so many different compartments that bring me such joy.

And to not step into things because your mind is telling you, you can't, but to begin asking yourself, how would I, if I decided I was going to,

uh, life of, and as it relates to this podcast is practically going to look like this, this summer, we're going to drop a series called the first 17 years, which it's just going to be a look at the characters that built my career. We're also going to be launching a network called the ANZ network. Scared, confident will be a show on it.

So think of it as like a chapter book where scare confident will be a chapter, a voice in this idea of a passionate. Uh, life of ant, and we're also going to be bringing other voices, other shows underneath that umbrella to help you in other ways that, you know, not just my voice can, I'm also going to be doing a mini series with my girls.

This idea of how technology fits into our family is something I'm thinking a lot about. And so we're going to look at a mini series. So one of my ans is that I'm a mom and I want to be really intentional about that. So I'm going to explore and share some of the things that we're really picking through as we step into the teenage years in our home.

So that's just a bit of an overview of what we're going to be looking at. It won't be the only thing we're excited for where scare confident is going as always text me. If you have a question I love to hear from you and you will most likely hear your question answered on the show. So thank you for listening.

Thank you for sharing this journey with me. And I hope that you feel more confidence as you explore a passionate life.