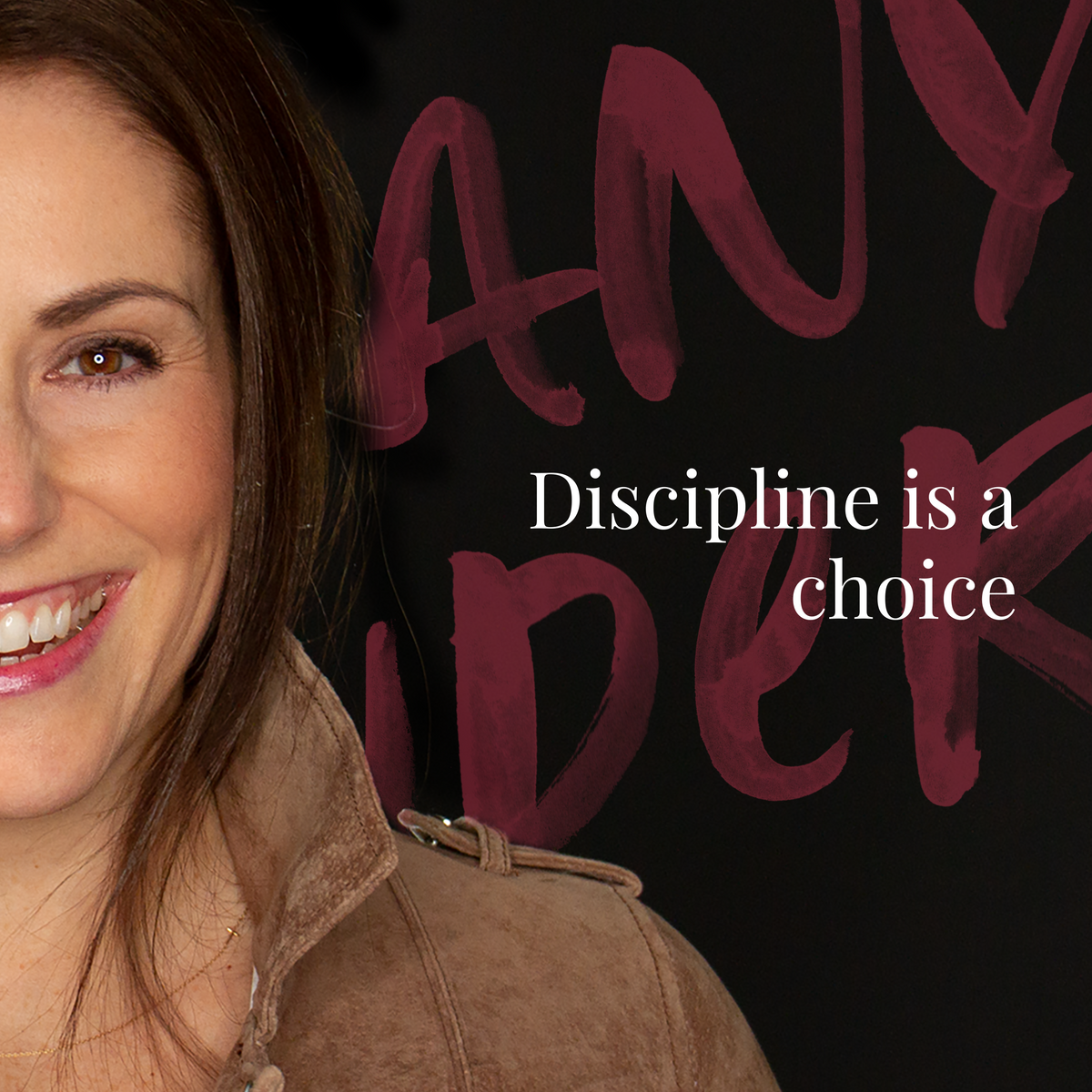 Discipline is a choice

In this short episode, Tiffany reflects on her journey towards becoming more disciplined and shares ways she’s made it a part of her mindset.

In this short episode, Tiffany reflects on her journey towards becoming more disciplined and shares ways she’s made it a part of her mindset.

What practices do you have to make yourself more disciplined? Text Tiffany at 317-350-8921.

I'm your host, Tiffany Sauder. And this is Scared Confident. I wanna take a minute and just talk about the idea of discipline. It's not an idea, but to talk about discipline. It has been something in my life that has been very acute because it's really difficult for me to be disciplined. I don't naturally like gravitate towards things that are disciplined.

I like disruption. I like extreme things and discipline is trying to minimize both of those things. And so I was thinking about my journey with discipline has been attitudinal. It's been physical and it's been spiritual and I'm sharing these things kind of just a, when I have to talk about it, it brings it into consciousness for me about what have I learned and what am I doing about it?

And to see if it maybe helps you as you seek to move towards a life that has more discipline in it. The attitudinal piece really started there, like for a large percentage of my adult life, I didn't even wanna be disciplined. I wanted all of the things that discipline brought. Like I wanted to be fit. I wanted to have money.

You don't get the fruits of it without doing the thing. And as life got more complex and I didn't have some of the outcomes that I wanted, I had to stop and reflect on, well, maybe my methods are wrong. And that has led me. I'd say in the last five years, maybe even three, three to four, like maybe five is stretching it.

To better understand what is discipline and why is it so important? And if you hear the story of element three, I, you will often hear me reference a scripture that played a really key role for me. And it is in second Timothy one seven, and it says for God has not given us the spirit of fear. But of power and of love and of self discipline.

God has not given us a spirit of fear, but, but of power and love and of discipline. So when I was working on a toolbox of things that helped me overcome fear, this verse was one of the first pieces of that. I would feel my, a body responding to fear. I would feel myself making decisions out of fear. And this verse, I would say, okay, well, if, if I'm acting through the power of.

God of Christ in me, but yet I'm acting out fear. That's not the spirit of God. That is the spirit of either myself or of Satan. And so what do I do instead? I said, oh, I could I act out of power. I interpreted that of like, confidence. Like I'm gonna act boldly. I can act out of love. That was fairly natural for me, cuz I really naturally love people.

But the last one of like acting out of discipline a sound mind a a rational place and not an emotional one has been the hardest part of that journey for me. So it has also been very much spiritual. And then the third is like the physical discipline. That that's way. I think we can most hold ourselves accountable things like the smallest increments.

Of things that you say you're going to do for yourself or for others, are you practicing discipline and doing that every single time? Or are you basically like giving up? Like, I don't know, like creating the habit of not discipline of like being flaky and I almost always have to have a very. Public scorecard at the beginning of a journey of discipline because I like praise and I like to win.

And so the desire for praise and winning overpowers, my hate of discipline in a way where I start to be able to get. Momentum. And then I like more naturally take hold of discipline, but that has been a really helpful part of me starting any kind of journey of discipline, whether it was in business, whether it was financial goals that we had personally, or as a company or physically with your body or endurance or whatever that looks like whenever I was willing to make the scorecard public one, I was admitting to myself, I won't be disciplined with this.

Privately the second was, I was being incredibly explicit with myself and the people I was sharing it with. And the third is I had accountability. Like I was gonna look like an idiot if I didn't do it. And that cycle has really helped me a lot. So I. I don't know where discipline is for you, whether it's natural or unnatural like me and whether or not it's like a muscle that is atrophied or for, or pretty strong.

But when I think about this category of discipline, these are different ways I've wrestled with it. And some tools that I've accidentally cobbled together, that help me more naturally shift to a place of discipline. When I know that I'm not getting the outcomes that I really, really. Desire in my life.