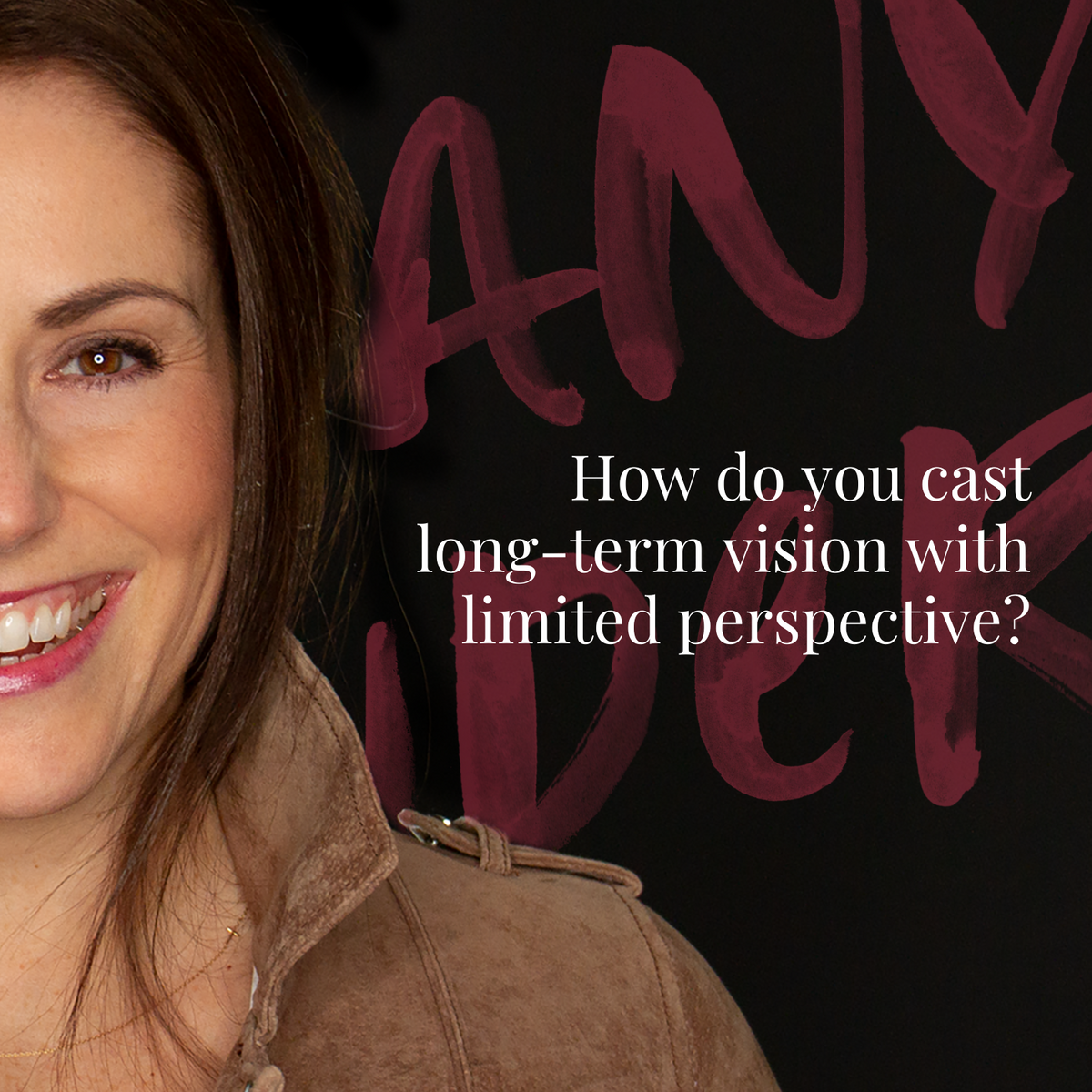 Q&A: How do you cast long-term vision with limited perspective?

How do you cast long-term vision with limited perspective? This one is for the younger listeners. Whether you’re just starting your business, growing one, or looking into the future.

How do you cast long-term vision with limited perspective?

This one is for the younger listeners. Whether you’re just starting your business, growing one, or looking into the future.

There are 2 important factors here: what do you want your organization to look like–AND what do you want your life to look like as the leader of that organization (and at home)? Listen in as Tiffany shares her perspective on how casting her vision for both her life and her company has changed over time, and hear her practical tips for how you can keep your company’s vision at the center of your mission from day one and beyond.

What does it mean for you as a leader individually? As it relates to the organization. Is it possible to be able to create a vision five to 10 years into the future? That's gonna stick when you're in the first, I don't know, couple of years of the journey, like, is that possible? I'm gonna answer. I don't know.

because I have a few data points, but what I can tell you that has been the same. In my journey with element three, even though I would say our vision has become more crystallized over time, it's evolved pieces have come into more focus. And so we can use more precise words to explain it. And I would say that makes it easier for other people to talk about it in the same way that I do the things that are at the same is that we knew we were going to be excellent.

That was the same. And we've said that different ways. I think it started with me just wanting to know, can I individually have professional excellence? And could I create an environment where I could know that that was true, that there was a space in the world where I could be professionally. Excellent.

And then that evolved to a place where there was sort of internal vibe element three, where we said we were competition killers. It was this idea of, we wanted to be. Better than our peers. And some of that had a bit of a hard edge to it that I don't know, served us very well, but we wanted to challenge the way that things had been done.

We wanted to be able to disrupt ourselves. We wanted to be able to like look at things in new ways. And so we had ways that we would fire our brains up to think about how do we disrupt an industry that everybody kinda looks at and poops on. because it hasn't been known for its innovation and that would make us mad and make us work harder and wanna prove people wrong that this isn't a business type worth investing in.

And so that was very much a part of our ethos in some ways still is we want to be able to disrupt ourselves. And now in this version of ourselves, as we say to foster growth in people and business, so that they can change the world, it really is still about changing the world. That has always been part of who we were.

And who we are. And so I think the products and services that you're in, in almost every business are gonna continue to evolve, but that core feeling that core vibe, I think very much stays the same and the way that you're able to articulate it. I think it's. Clearer over time. And I think making sure you don't look at it as a sign that you have it wrong.

If you find yourself refining it every year or three years, because it does come into CRISPR focus for you as an entrepreneur. At least it did for me about what do I really mean by this? And it was 25, 24 and a half at the beginning of the journey. And I'm. 42. Now there's a lot of life that's lived in there and it was more about me individually at the beginning.

I wouldn't have said that to you because it felt socially embarrassing. To say that that was true. But looking back, it was about me and wondering, could I compete in a bigger pond than where I grew up? And then it became about figuring out can I build a team that can win. And it became about our winning as a company.

And now at this stage, I'm understand like, life is kind of about what you can give. That's actually how it plays out. And does that mean I had it wrong at the beginning? I don't know. I think it was part of the journey for us. But excellence has been part of our core since the jump we are our toughest critic.

It's never good enough. We're always pushing for the next level. We're always wanting to redo it because we did it and we can make it better again. And that's just part of our DNA and it has been from the jump. So I hope that's helpful that I think stepping back and thinking, asking yourself, what do I want it to feel like to be what I see we can become and write those feeling words down because the product you have, the service you deliver.

I think that piece is gonna change a lot, but knowing what you want the core of the company to be, I think is really important. And then on the personal side, as a leader, again, for me, I'm very intuitive. so it's not this rational set of rules for me. I really love to live life. In a way that to other people looks on the edge.

Like my days are a little too full. I'm like 12 seconds late to a meeting. I've gotta drive 13 miles above the speed limit to get to my next meeting. I love that feeling. I love it when my life feels that way. I'm maximum productivity when that is what it's like. So when I say, what did I want my life to look like?

I wanted to always to be full. So the things it's full of today is very different than the things that it was full of 10 years ago, the stuff on my calendar. But it's still very full and I will probably always live a very full life because it's how I experience maximum feedback from life. I don't need rest every day, I'm gonna need to sleep, but those types of things.

So if that's how I want my life to feel. And so what it consists of has continued to change. And I talk on the podcast about creating a purposeful life of, and I have set these long term ands for myself. I said when my kids were born, when they're in middle school, I wanna have more time flexibility. So I had like, you know, 11 years to figure out how to make that true for myself.

That was something that I wanted. That doesn't mean my life is less filled, but it does mean I have more capacity for like, I ran a bunch of people to practice this morning into a dentist appointment. And 10 years ago, I didn't need to do. For some of it and I wouldn't have done it for other pieces, but that was a goal that I had.

And so I had to strategically figure out how do I make that such that I have more time capacity for those things, but I'm not any less full it's just filled with different things that I've chosen. I have also decided that there's just some things I'm not going to accept. People, accept their physical appearance, changing dramatically with age.

That's not saying I'm gonna like, well, I don't know. I might pump myself above to, I can do whatever I want to, but I'm going to take care of myself. I'm gonna exercise. I'm gonna take the time to buy clothes. I really like, those are things that I am going to choose in my life. I'm not going to accept that.

That has to leave. So a cheesy example, but for me, I've just always loved self-expression in the way that I look and the clothes I wear and bright colors and all that kind of stuff. And I didn't want to accept that life was gonna take that for me, that I was gonna get too busy to do those things that I just really love to do.

And so I think as you evolve as a leader, what are the things that I don't want to deteriorate out of my life, that I'm not. Sacrifice, you know, I think about the same thing in my marriage. Why is it that newlyweds and people on movies are the only ones that have great marriages. That's stupid. Why do we accept that as the outcome and how do you pick something different for your life?

So that doesn't mean to say that there haven't been seasons where some of those choices have been harder to manage than others. That would be naive to say that that's not true, but we are adults. Especially when you're an entrepreneur. It's not that there aren't things that ask an insane amount from you in seasons, but you need to be moving towards a life that you've chosen.

Otherwise you're just building a prison for yourself and that's no life. So I think having intention is important. I also think not being paralyzed by perfection because life is a journey. It is trusting your intuition and trusting that you're paying attention to what's going on. That you'll course correct.

When you've made a stupid decision. When you've overcommitted, when you've made a mess of things, we've all been there and not believing it has to be perfect and continuing to make iterative choices to get you closer to the thing that feels like what you want. So what else is on your mind? Text me 317-350-8921, 317-350-8921. And be sure to follow along on your favorite podcast app. Thanks for listening today.