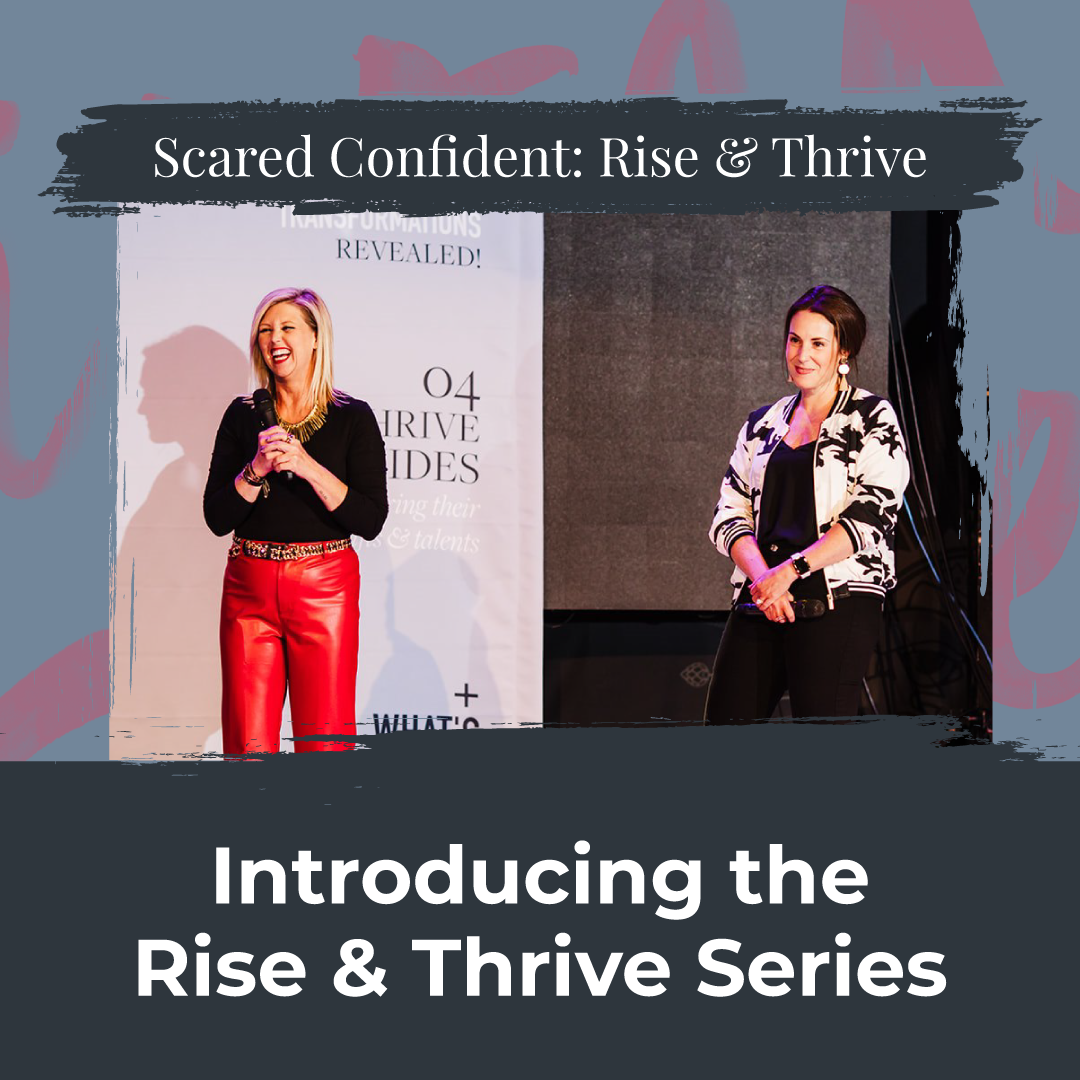 Rise and Thrive is a subseries of Scared Confident, highlighting the stories of seven women who took part in the Rise and Thrive Experience. Each participant shares how they have been learning and growing throughout the experience. As we share these stories with you, think about how you can stand tall in your own story.

“When we stand tall in our stories, we give others the invitation, the courage, and the confidence to do the same.” —Rebecca Fleetwood Hession

This seven-month journey culminates in a grand finale called the “Stand Tall In Your Story” live event. Each participant shares how they have been learning and growing throughout the experience. As we share these stories with you, think about how you can stand tall in your own story.

If you’d like the chance to take part in your own fear interview like Tiffany did for Season 1 of Scared Confident, text the word FEAR to 317-350-8921

Tiffany: this season has taught me anything it's to own and claim that the voice in my head that tells me to make myself small and that I'm for myself is not true. The truth of who I am and what I was made to be is that I am desperately for others. And it's why I put myself so frequently in an uncomfortable way.

a couple of months ago attended this event in Indianapolis called rise and thrive. And it was stories of seven women on stage that had such courageous vulnerability. You couldn't walk away and not be touched in a profound way. as we look at this bridge between seasons, I thought what a great fit.

To take the stories of these women and to share their courage and their story and their vulnerability with you guys, my listeners. And so that's what we're going to do. I've brought Rebecca on with me today to give a little bit of a behind the scenes about what rise and thrive is kind of where it came from.

It's her event. She was so gracious and. Letting me stand on stage with her and just really encourage the group of people that gathered that day. And so Rebecca, if you would just share a little bit about what rise and thrive is kind of who you are and give a bit of a backstage pass to what this whole thing is.

Rebecca: It was so fun to have you there, and I've received so many amazing comments about what it was like to have two strong women with separate visions come together and share those. So thank you for being a part of the event. So. I'm Rebecca Fleetwood hessian. I am an executive coach and keynote speaker, and a big part of my business is to build community because I believe that there is so much power in a small group of people sharing in life together different than a.

Mentorship or a best friend, but a really intentional community of people with diverse thoughts and ideas and the power of bringing those together. And so I designed this experience called rise and thrive, which is a seven month experience for seven women to go through together. And throughout that seven months, it's really a deep exploration of your unique gifts, talents, and abilities, what it means to overcome uncertainty and really use those unique gifts to serve others.

Because what's really great about thi is we have so many similarities. We use different words and we have a little bit different application of them, but inherently I think we both want the same thing is for us to stand taller in our own stories to. You know, use the name of the event. So rise and thrive culminates into this event that we did together, which is called Stan telling your story.

Because I believe that when we stand tall in our stories, we give others the invitation and the courage and the confidence to also do the same. And I wanted to model what that looked like in a really fun environment. And to make it be this thing where it doesn't have to be. So serious, you know, we have music and food and drinks and laughter and just honor the, the real humanity of our stories.

Tiffany: I think for people who weren't there, it's important that they understand the context in which these stories are told because when you are, and I are on a podcast microphone where most of the time in the room by ourselves or with one other person.

And so to share intimately, in some ways you're still doing it with a group of people, but you're not looking them in the eye. And so just to set the stage for people, as you listen to these stories, Rebecca did it this year in the Vogue, which is kind of like a nightclub setting. So picture a stage where usually there would be a rock band and there was a band and this woman with.

Audience, it's dark lit and the stage is bright and you've helped them in many ways. I think be the main character in their own life story again. And they've been made over and they look, you know, sort of this glamorous moment for them to be able to look back physically and see, I did that and I experienced that and I saw that and I felt.

Myself, do it and be present. And so they walk out on stage, they share and kind of a Ted talk type way where the audience is quiet and they are left alone with their words and their thoughts and they share their story. And then of course, you know, we. Celebrate their courage in being vulnerable, but imagine telling some of your most intimate stories at intimate moments and the things that your mind probably as they go through this process, your mind has tried to quiet that story in that part of you for a long time.

And so having the courage to be able to share that audibly so that you can be held accountable for that discovery. I think that has been the challenge for me, as I stepped into the podcast space is as you start to sort of journal it audibly. The world will begin to hold you accountable for those lessons and the things that you've learned.

And I think there's a lot of courage. It takes to really step into that. So anything you'd add before we kind of talk about season three of rise and thrive and kick it off to the stories of the women.

Rebecca: No, you've done a great job of articulating exactly what my vision was to give our stories honor and fun and a place.

And I always think about the journey to get there the seven months, you know, as we get closer to the event, the anticipation and the nerves and things really start to, to jump up for these women, knowing that they're going to stand on this stage and what's powerful about it in community is they're doing this together.

And it's, it's a beautiful thing. Thing to see it unfold afterwards, where they're just so proud, not only of themselves, but of each other. And they've experienced that thing together. It's beautiful.

Tiffany: it is really special, you cannot be at this event and not be touched and moved.

It's simply impossible. But if someone listens to these stories of these women and they, or someone they know is interested in participating in rise and thrive and. You know, they feel like I just a call on their heart to go through an intimate journey. Like this what's the best way for them to kind of raise their hand and say that.

And if they do raise their hand, like what does that mean?

Rebecca:. So we have five spots open. It's an experience for seven women. We start late October. If you're interested in exploring more about it, you can go to my website, which is we thrive.life. There's a tab that says rise and thrive and a tab that says stay in telling your story. You can get a little more information about it.

Tiffany: Awesome. And we'll also be sure to include everything in show notes.

If you're driving and you don't have a pen and can't write it down, we'll be sure to put it in the contact information in each of the women's stories as well, so that you can get connected to that. Rebecca, thank you for sharing. So courageously your own story and journey again, I think you are really good at being kind of patient zero, um, as you lead women through this process.

And so thanks for your courage. I know that we are all better for it here in the city, as we watch the work that you've done on yourself. And as you share that, with the women around you, I hope and know that these stories will give you more courage to be able to step more authentically into who you are and to make sense of the story that life has given you.