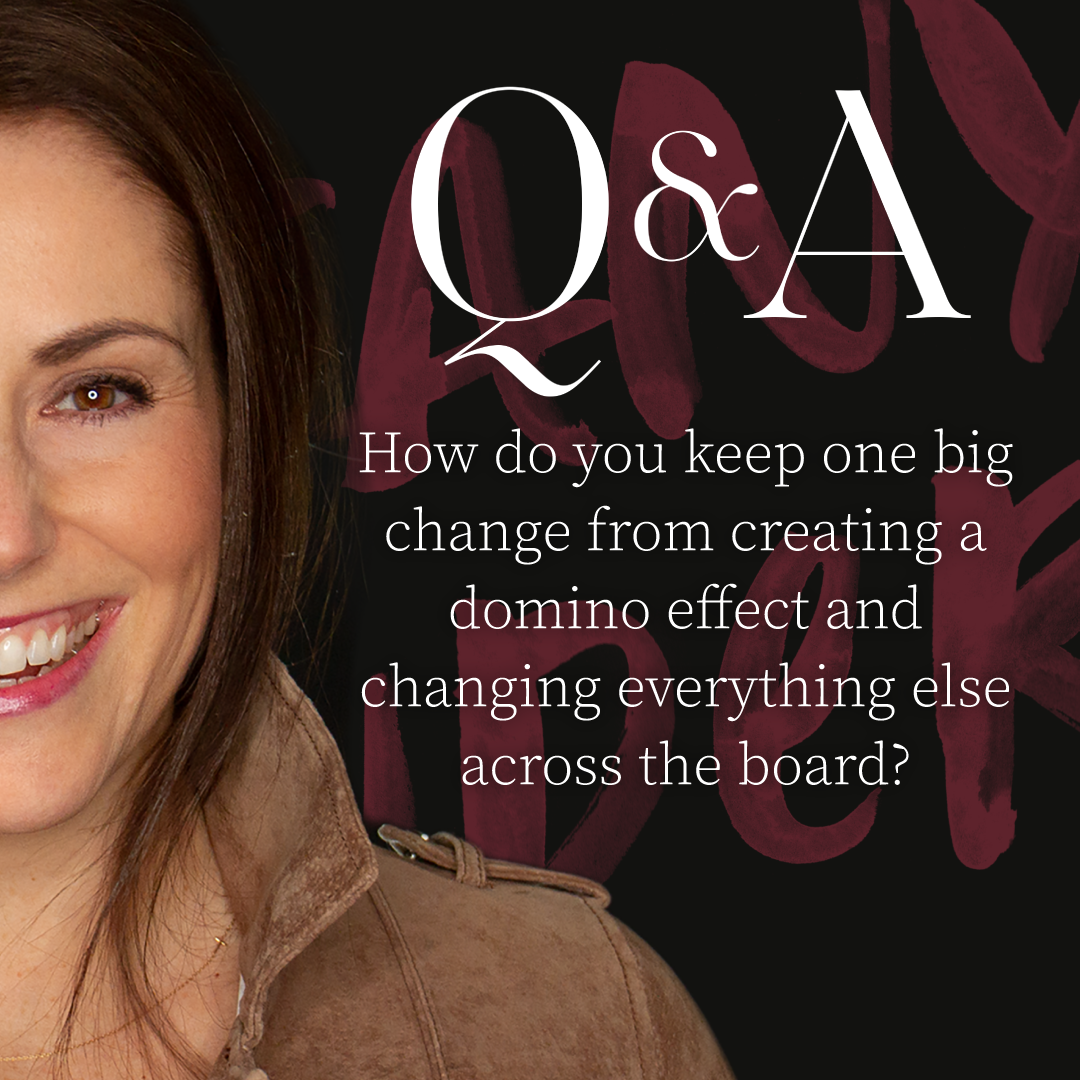 Q&A: How do you keep one big change from creating a domino effect and changing everything else across the board?

Seasons of change are naturally disruptive, but they don't have to upend everything. When the Sauders undergo multiple life changes, how do they go with the flow? Listen to how clear communication and expectation setting sets them up for success.

“Earlier I talked about the core five: the house, kids, food, laundry, and you. You have to solve for those five things every single week, and when we're in seasons of transition and craziness, I actually hold more tightly to the disciplines I know set us up for success across those five areas.” —Tiffany

Seasons of change are naturally disruptive, but they don't have to upend everything. When the Sauders undergo multiple life changes, how do they go with the flow? Listen to how clear communication and expectation setting sets them up for success.

Q&A: How do you keep one big change from creating a domino effect and changing everything else across the board?

How do you keep one big change from creating a domino effect and changing everything else across the board? I'm your host, Tiffany Sauder, and this is Scared Confident. So this question is super relevant right now in my life, because we are in a stage of lots of change in our house. My husband started a new job with a new company that is in a different state.

And so I think this is a really good question because it is true. Things do change the decisions that we make, the jobs we have, the relationships we have, the commitments we have, the environment that those existence. Change it flexes. And so what do you do to make sure that it doesn't just become a mess in a hot minute?

We're not going to be able to guess everything, but the things we imagine are going to change and what that is going to mean for your expectations of me and my time and for the way that we need to commute. Because we just spent a year and a half with him, basically at the dinner table every night and that was going to change.

So how do we need to make sure what's happening? Who needs to be aware who's going to be late, all that kind of stuff. So we had to change the format and cadence of our communication because he wasn't going to be home every night. And the other is expectations. Like literally just asking, what do you need from me?

And so he needed to say like, I need you to release the expectation that even if I'm home, I'm going to be at dinner because that is still the Workday for them. I'm like, okay, no problem. I can certainly do that. Him setting my expectation around that totally changed what could have been some serious drama of like a staring with eye rolls into the office store.

Come on. Like the food is ready. I'm irritated. It's time for dinner. We need to sit down and now I just tell the girls, Hey, if dad's home, but in his office and the door's closed, he may be in a meeting and we're going to go ahead and have dinner. The same exact experience, but my expectations were set differently.

So we could still like go on and it not create a problem on both sides. So that is like a really micro thing, but it is that pattern over and over and over for us when things fall apart, when there's an environment of a bunch of chains. The other thing that I do is in one of my earlier Q and A's, I talked about the core five, the house, the kids, the food, the laundry, and you have to solve for those five things every single week.

How's the kids, the food, the laundry, and you, and when we're in seasons of transition and. Craziness. I actually hold more tightly to the disciplines that I know set us up for success across those five areas. So for example, with food, I talk about food. It's important to our family. We are not a takeout family.

I know that the evenings go better when I meal prep. When there's a plan, there's a menu and I have veggies preps and all that kind of stuff. And so I am very disciplined about getting that done on Sundays. When I know we're in stages of transition or things are going to be crazy because it's one less thing I have to solve in that light.

Five 15 to 6:00 PM. 45 minutes. That is like a crash of chaos after school. So that's one thing. The other thing I do is I set really crisp expectations for the girls. I need you to get your rooms cleaned. I need to have your beds made. I need you to bring your laundry down. There is no room for us to be sloppy.

In these core disciplines that keep our house running because there is chaos and other places in this change event. And so if everybody wants to stay on their game, we all want to be able to have some space, to have like a little bit of fun or play a game or whatever it looks like. Then we have to be really disciplined over the next few weeks.

Cause there's just no margin for error when you're in these big moments of transition. Here's one more crazy thing around food. This is stupid, but by Friday I'm so tired of making decisions, especially when my husband has been traveling because I have to make all the decisions. In the evenings and I'm just total decision fatigue.

And Friday nights, we almost always got for dinner. And so I've told him it is such a gift to me. When you make the decision on Friday night, about where we go out for dinner, it's like one less thing I have to do. And if I didn't pick it out and I don't know where we're going, it feels a little bit like a treat to me and it's silly, but that one little communication made it where he, no matter where he is, he can figure out where dinner's going to be on Friday.

He doesn't have to be here to do that. And it's one less decision I have to make, and there's not like this. Irritable convergence at Friday at 5 45. And there's no reservations to be had anywhere. It's like, we kind of got in front of that too, so, okay. I'm like 10 for 10 on examples about food, but whatever.

So hopefully this is helpful.