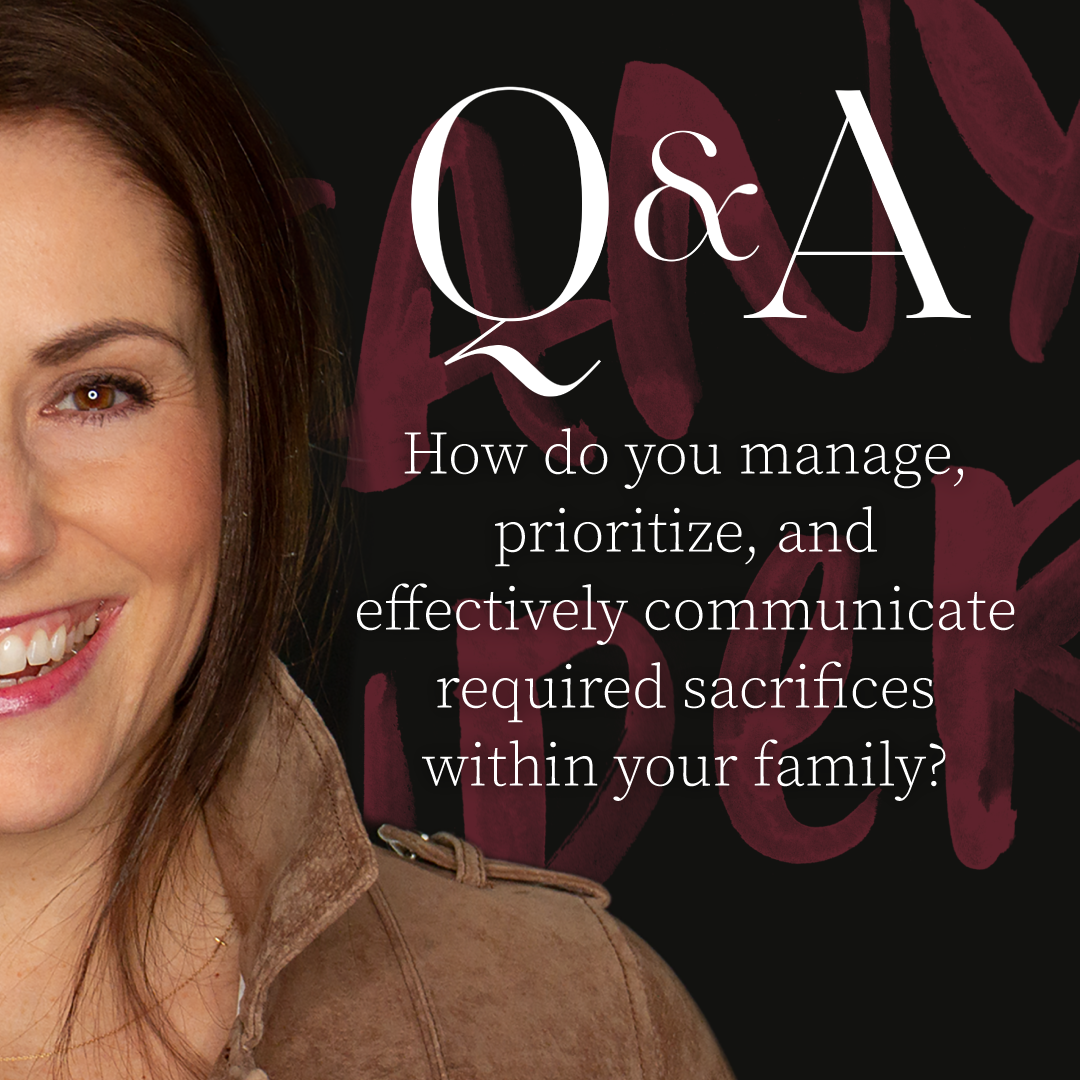 Q&A: How do you manage, prioritize, and effectively communicate required sacrifices within your family?

In this Q&A, Tiffany describes her family’s process of sacrificing for one another to make space for what’s needed. Not everyone will understand your choices, but as long as your family members do, that’s all that matters.

“As long as J.R. and I understand what’s needed, that's okay. Not everybody is going to understand your plan for your life and what you're going after and why that's important to you. And so, sometimes they don't understand, and you maybe need to make those decisions because it's the right thing for your space and your family.” —Tiffany

In this Q&A, Tiffany describes her family’s process of sacrificing for one another to make space for what’s needed. Not everyone will understand your choices, but as long as your family members do, that’s all that matters.

Q&A: How do you manage, prioritize, and effectively communicate required sacrifices within your family?

I'm your host, Tiffany Sauder. And this is Scared confident.

When I hear this question, I think of two applications of it. One is inside the nuclear family and I'm hopeful. This doesn't feel like a broken record, but when it comes to my husband and I, the most important thing is to make sure that we understand. What the other person has to have from us that week, so that we get through the week and we feel filled and it has taken some work for us to get.

Really crisp and what that is so that we can make sure that we're meeting the other person's needs, but we both are trying to get really big things down in our lives. And as a result, that does mean that there's going to be some sacrifice and sacrifice for us, looks like, Hey, we're going to have to kind of know who's on first in the evenings and running to practices and not do the like, iReal like.

You know, don't be a jerk. If something came up and the other person is needed at work or a last minute dinner or something like that, we have really worked to give the other person grace so that it doesn't become this like big, stupid, emotional monster in the household. That's just super unnecessary.

And the other side of that is that. Jaryn I have to know that if you ask for something last minute, in particular, that I'm mixed. I like believe that's what really has to have happened. Like what has to really happen for him. And I don't question it and vice versa if I need. And evening or something planned.

We both want to prioritize our family. So when the other person needs to be gone, I know it's important for what's going on in his life and in his job. And the same for me, I think he knows if I have to travel overnight or something like that, that it must mean that I really need to do it. So I don't question it.

My job is to support him so that you can do his job really well. And in return, he does the same thing for me. I think that with kids. Especially now that our kids are in school, I have found during the school year, the, the train just falls off the tracks when we are both gone in the evening. And if we're both gone overnight, so I'm talking about in a post COVID world or pre COVID world when we did travel and we got to the place where we just knew it was just too much stress on the girls for us to be gone.

So if. He was in the psych, whoever was on the calendar, first one, and that was our agreement. So if he was scheduled to be gone overnight and I suddenly got a speaking invitation, then I would say no to it. I wouldn't even ask him. Maybe it would work sometimes, but again, it just makes it simpler when we know this is just the way it works.

So very rarely like maybe once every other year would we both be gone? On a night, but we just know that's too much stress on the girls and the same in the evening with their homework. And they're just, I think, needing to reconnect with us as their parents. It's okay. If one of us has gone, like things totally still run fine, but if we're both gone, it just, I feel like I find the next morning, everybody's a little grumpy.

The girls will be like, well, mommy didn't do this last night. Like, it just doesn't feel the same. And so that's fine. I feel like that's something that they need from us right now is one of us needs to be home after work and everything goes a lot better. The other thing I'll speak to in this idea of like, it just takes time, energy, and compromise for sure.

To do something big is that sometimes your extended family doesn't always, totally understand that. And there's things you have to say no to, or stuff that you show up to a little late, or you're not able to like. You know, be all in a hundred percent because of some commitments at work. And we both were on the same page that as long as Jr.

And I understand then maybe other people won't and that's okay, because not, everybody's going to understand your plan for your life and what you're going after and why that's important to you. And, and so sometimes they don't understand and you maybe need to make those decisions because it's the right thing for your space and your.

Family. I know that there's been things that we've showed up to a day late. There's things that we've, you know, had to leave a little early there's things where it was just hard for us to get there on time because of some of the goals and commitments that we had at work. And so, again, as, as long as Dara and I were on the same page, we were okay with that.

And then the third thing I'll say, as it relates to sacrifices, you have to care pretty clear. Or we did about who those friendships are that really. Edify you like, not just a good hang, like maybe a good hang, but that really are helping you grow the light discussion as rich. And you leave just feeling smarter and like you've got new perspective and those relationships that really feed who you are becoming and.

I find this, especially with some of my young employees. And I think Darren, I have gone through this too, as we've grown up and had responsibility, really young is some of those friendships just didn't serve who we were becoming. And it feels a little cutthroat to be like, I guess, you know, I'm not that they're not my friends, but I just don't give those relationships as much time.

And again, I'm really specific with that when I schedule and say yes to things. Because there is a never ending list of things you could go do, but really being clear about who is your tribe, who loves you for who you are, who is going to call you on your crap, who is just like, I don't know, again, really growing in the same direction that you're going.

That has been a really, I think, freeing piece. This was the weekends. It's okay to be home on a Saturday. It's okay. Not to have plans every Friday and Saturday night. Like our kids need that as well. And so not over-scheduling and I don't get the credit for that. Jared definitely gets the good for that because I tend to over-schedule, but I've really seen the wisdom in it.

So it is 100% going to take sacrifice to do something big. If you don't decide what it is that you're going to sacrifice, the thing you'll sacrifice is your family and friends like your nuclear family relationships. I guarantee you because nobody is going to tell you, you know what? You shouldn't come to this thing.

You know what I'm totally going to, uninvite you, you know what I gave you this opportunity, but I think I'm going to tell, you know, they're, they will keep coming and you have to say no to things so that you have the space. That your family needs from you that you guys need from each other and the unique for you.