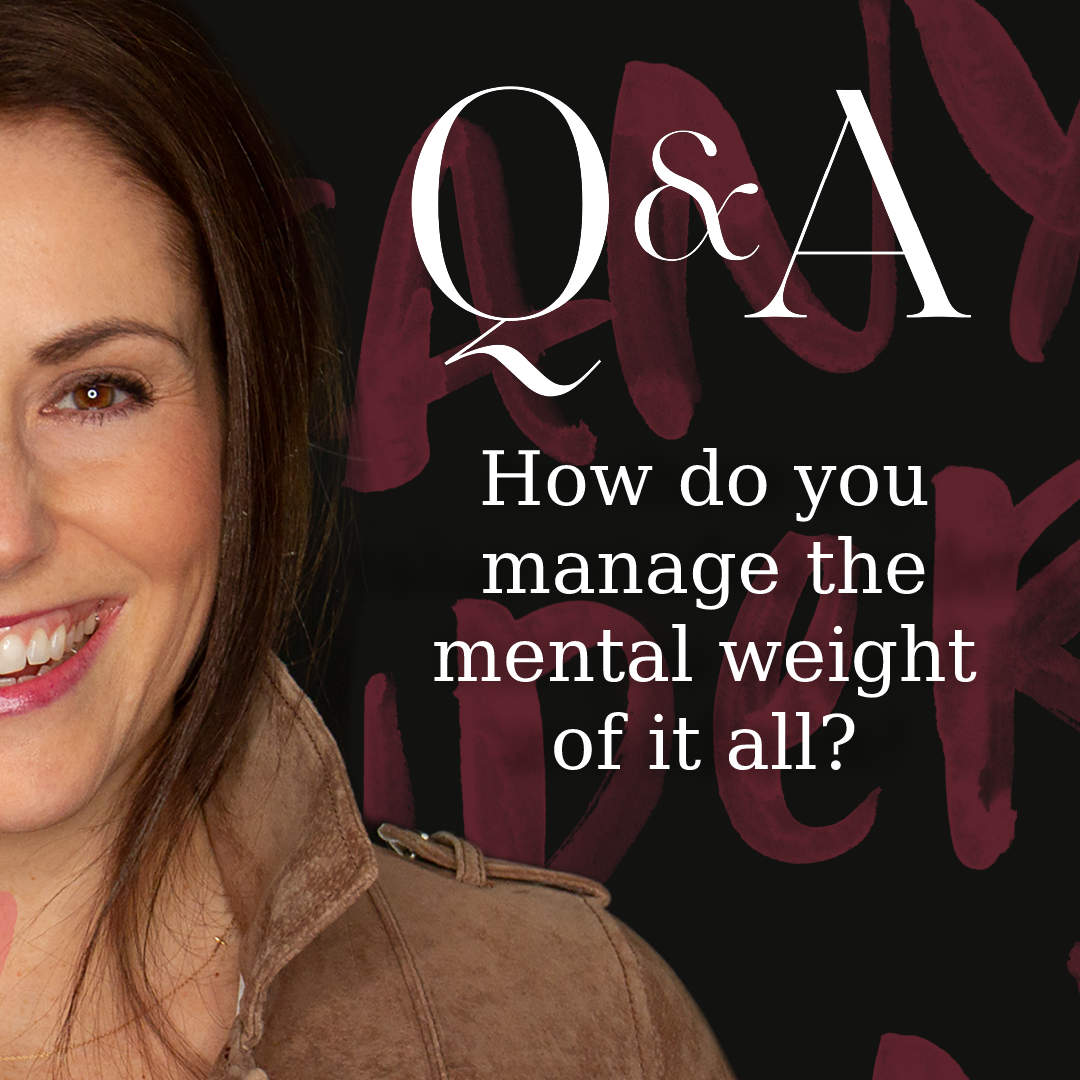 Q&A: How do you manage the mental weight of it all?

Tiffany sheds some light on what it takes to be an entrepreneur and business leader. What’s a guiding principle that helps her address the mental weight of this role? Listen to this Q&A and follow along to wherever you get your audio.

Tiffany shares her answers to the questions above while shedding light on what it takes to be an entrepreneur and business leader. And what’s a guiding principle that helps her address all the above? Listen to this Q&A and follow along to wherever you get your audio.

Q&A: How do you manage the mental weight of it all?

I'm your host, Tiffany Sauder, and this is Scared Confident. Behind the question of how do you handle the mental weight of it, I think is really the question, does it ever feel easier? Do I ever feel less stressed? Do I ever not feel so tired on Fridays? Do I ever feel safe? For me, I would say that, yes, it normalizes. I definitely can connect to the heaviness of realizing, okay, these people are relying on me to perform so that they can pay their mortgages. I completely connect and understand the idea of the mental weight of the responsibility, and in short...yes, it normalizes. But I also think it begins to change because I at least started to understand it's not luck if I stay disciplined to the things that I know put us in the best possible position for success, that is what I have control over. I don't have control over the outcome. But I do have control over my behaviors to put us in a position for success. I learned that from Brian Kavicky, in sales training. In sales, you never have control over whether or not the person on the other side of the phone is going to buy from you.

Like you have no control over that. But what you do have control over is the behaviors that put you in a position so that you have the right at-bats, you put your brand and your product in front of the right customers, you show up in a way that is pursuing truth and not trying to sell something. All of those things put you in a position where you can't control the outcome, but you can control the behaviors.

And for me, that was how I started to normalize the mental weight of the responsibility. I think the mental weight comes from feeling like, I dunno, is this luck? Like, what if I'm not successful? What if I screw this whole thing up? And when you focus on the outcome, it does make me at least feel very out of control.

But when you start to recognize no there's principles, there's disciplines, there's frameworks, there's things that we do to show up consistently so that it isn't luck. And that starts to give me a feeling of some control, which began to then release the sort of mental way of Frick, I dunno, like, is it going to be successful?

I think moving it from luck to some semblance of control and strategy helped relieve that for me. The other things that come up for me when I think about this question, and again, if you work beside me, you probably heard me talk about this. I think about my 25-year-old self, and there was like this very tiny circle around me and the things inside the circle closest to me were those things I had done before, I felt comfortable doing, I had some experience exposure in everything. Outside the circle was something new. And like the first decade of leading the company and learning how to do anything, you're taking almost daily things from outside the circle that you haven't done before and putting them inside the circle so that you've done them before.

And that process, if you sort of mentally picture each year, If you're doing new things, you know, learning leadership, pushing yourself, having to go through business changes, fire a client, bring on a client, bring on a new team, fire an employee, like all those kinds of things – it's hard the first time.

The last thing that comes up for me is I also would lay in bed at night sometimes and think, well, if I don't have confidence that I can do this, who can do it? Like who can, who can do it? And maybe this is just an air of self-importance. I don't know. And I'd often get back to like, well, I am the person on the planet who's probably closest to the answer of what should we do next? Like, I'm the only one who's worked at Element Three since day one. Like I probably have the most amount of context. The vision was the one that I laid out. Like, you know, again, not that other people can't do it, but it was like the sense of owning...you do.

You will know, you will figure it out. You will solve the next problem and experience starts to teach you not to freak out when there's something new in front of you that you've never seen before. I'm not in any way suggesting that I've done this on my own or that I am the reason, but this courage that you start to get, like it's just another problem. I've seen something sorta like this before, or I know somebody who's gone through something like this before, let's call them. Let's sort of get some context and just gaining courage that maybe you are the person on the planet closest to the right answer and just keep stepping through and keep trying and keep solving problems.

I said the other thing was the last thing, but this one really it's, I think also knowing your own cues that you need to rest and recharge. I was recently asked what my biggest sort of screw up over the last 12 months was, and that right now I'm in April of 2021. And my biggest gripe of the last 12 months was not recognizing how tired and exhausted I was going to be in the first quarter of this year, 2021, after leading through the pandemic, having a baby, and just the collective stress that we felt as a society – and needing to lead through that. You really didn't have a lot of space and capacity for your own needs. I knew that, as I was going through it, I totally knew that I had just had some things I had to suppress and sort of move through quickly because it wasn't time for me to feel.

I had a baby who needed me. I had a company who needed me. We needed to sort of figure out how to lead remotely. I was talking to my leadership team all the time. My own needs for lots of really good reasons were just not relevant. So in the first quarter, like internally, I kind of crashed. And I suspect my company feels like I wasn't very available for them in the first quarter.

I frankly didn't have anything else to pour out. I wish so desperately, I would have stepped back and said, you know, I need two weeks. I need 14 days to just rest and recharge and just give myself some time. I think it would have been such a stronger leadership decision to do that and show people that vulnerability, to show that I get tired too, to show that they have permission.

Should I call a timeout when they just feel like they're really at their end, then in my head said things like, well, you're just on maternity leave for six weeks and, you know, gotta keep pushing. And I just, I don't think it served anything very well for me to be able to do that. And so, you know, going back to the idea of like the mental weight of it all, it really is the stress of responsibility.

And we're in when we're not fresh in our minds, get tired, that monster can get louder in our heads versus when we're fresh and crisp and, I don't know, just more on top of things. I feel put together now, but I think it took longer than it needed to. I think if I would have done that in the daylight, it would have served the whole picture better.