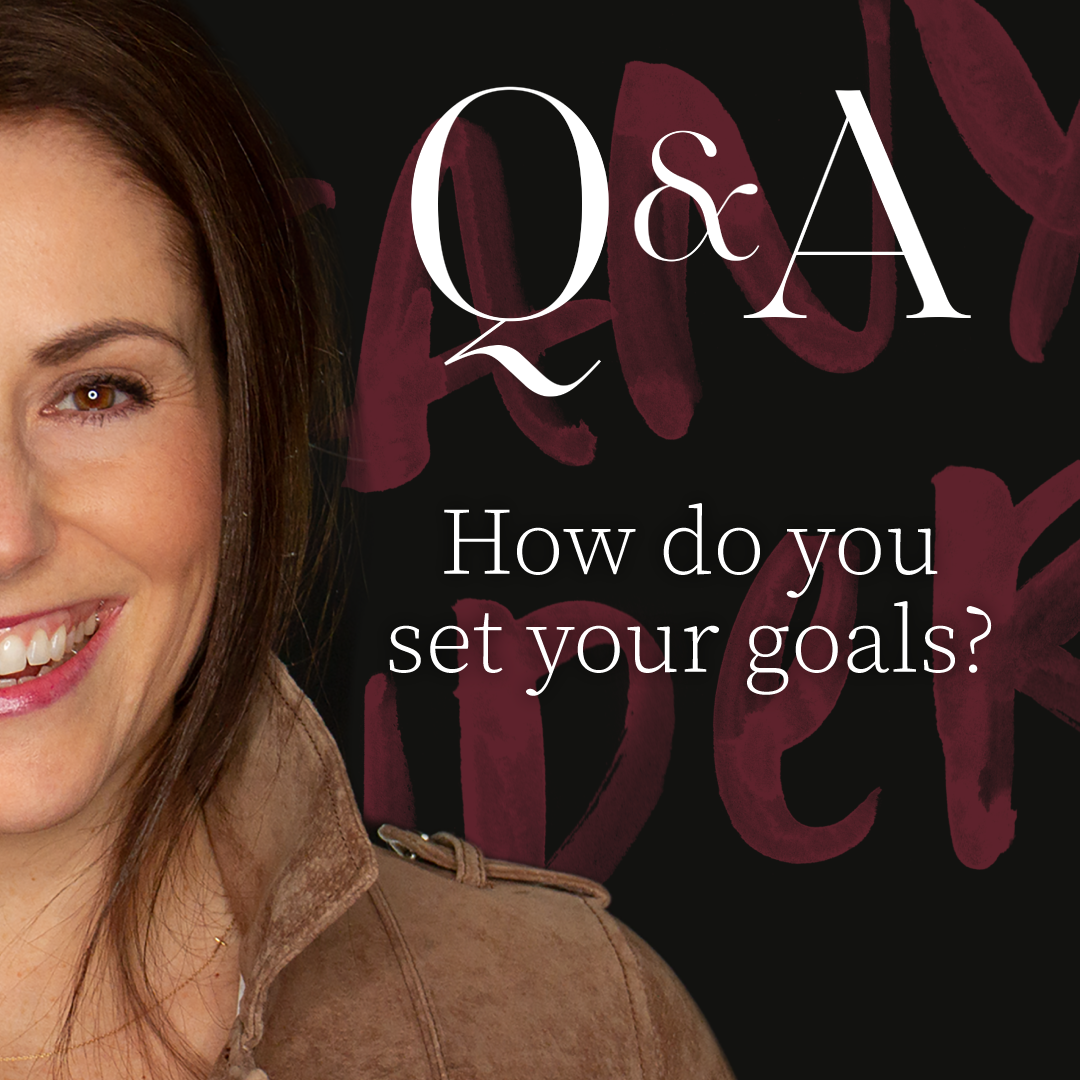 Q&A: How do you set your goals?

Goal-setting has never come naturally for Tiffany. She’s had to work it intentionally into the framework of her life. Even if a goal is only a well-educated guess or a dream, once you aim for something, you get a different level of feedback from your decision-making. What else does she think about when setting goals? Listen to this Q&A to find out.

Goal-setting has never come naturally for Tiffany. She’s had to work it intentionally into the framework of her life. Even if a goal is only a well-educated guess or a dream, once you aim for something, you get a different level of feedback from your decision-making.

What else does she think about when setting goals? Listen to this Q&A to find out.

Q&A: How do you set your goals?

Hi, Tiffany, this is John. My question is how do you set your goals?

I'm your host, Tiffany Sauder. And this is Scared Confident. I'm actually naturally pretty terrible at setting goals. It's something I've had to like really learn from scratch. And I've had a little bit of head trash around in a couple of different ways.

The first one, like when I was younger, I'd say like in my mid to late twenties, this idea of goal setting. I was like, I don't know. I mean, whatever's going to happen is going to happen. And how do you pick a goal? Like, it feels so random, especially when you don't have a starting point, like for anything.

And so I like when it came to like setting the business plan for element three in the early years, I was like, I don't know. What do you do just guess. And I would be kind of irritated about that. And then the answer, when I would ask people that they would be like, yeah, that's pretty much how it works is you guess.

And that felt so random to me, it felt so uninformed. It felt, I don't know. I just didn't like it. I felt like there needed to be reasoning that laddered up to what my goal was. And as I've just seen more, I've learned two things. One is. If you don't set intention towards something, your behavior is erratic because it's not like aiming for something and aiming for something is so much more powerful than aiming for nothing.

And the number that you pick matters very little. And right now I'm talking in the context of like business goal setting, but even in your personal life, if you have like a savings goal or an earning goal or something like that, like sometimes it's just. You pick it, you pick the one that feels good to you, which at the beginning feels super random, but it's a starting point and it starts to focus your decision-making and then you start to see this like pattern play out of here is my goal.

Here was my behavior and like, look how close I got. Like interesting. Or if you got really far away, like you didn't hit it at all, you start to have questions to be able to ask the environment of like, well, why did I miss it so big? How are my assumptions wrong? How was my behavior not aligned? And you start to be able to get a different level of feedback from your decision-making when you have a goal set.

I think on the personal side of goal setting again, in spite of the fact that I've worked really hard for most of my life, the idea of like wishing for something. Was a very dangerous game. For me, it was not something I was comfortable with this idea of like imagining a life that I wanted or picturing myself with a really beautiful pool or picturing myself with unlimited travel funds.

Like those are things I want, but I really didn't have the courage to be able to wish for those things. I was so focused on just. Executing the hard work and kind of this idea of like the thing will show up that shows up. And again, as I've gotten older beginning to create this space to dream, and one of the things I've really learned a lot in the last five years, like owning my own.

To kind of in a passive aggressive way, even with myself control those fears. So I definitely see the power in goal setting. It's something that I walk into with a lot more confidence than I did. And I see when I, when I teach young people, when there's people earlier in their career and they're reporting to me, I see that same discomfort.

When we're, let's say something like website traffic, or the number of marketing leads we're generating for element three. That first six months where they realized like, oh, there is a quantitative measure of my success is incredibly uncomfortable in particular because almost always at the beginning, I'm picking the goal for them because the number that they would pick is so safe and moderate that I know they're not going to push themselves.

And so I pick a number they're like, there's no way I'm getting there. And I'm like, well, there's definitely no way you're getting there. If we don't pick it and you might not get there, even if we do pick the number, but what I know is it will start to filter and drive your decision-making and behavior.

If we have a clear end point that we're shooting for together, and then we can start to figure out what's giving more or less results towards that goal from our behavior, because we don't get to actually. Just end up at our goals. Goal setting is a way that we integrate and keep control of what gets our time, what gets our energy, what gets our attention, what gets our relationship bandwidth.

That is the important of goals. It's not the inherent decision of the goal because you can change what you want when you get there, but it focuses. Those other finite resources, time and attention in particular, when you have really crisp goals and it also gives you a tool to be able to speak into the world.

This is what I'm trying to make happen so that others can come alongside you. This is relevant. I think, as we've started this gear confident exercise, I really didn't have a goal for it. At all, which is kind of classically, Tiffany, it felt like there was something I needed to say. It didn't really know what the journey was going to look like.

And I'm so experiencial in the way that I learn that I just didn't go read a bunch of blogs about it, or I just didn't know, like, I don't know what it's going to look like, but I just know I need to start it. I love being in the unknown. I love being uncomfortable. I get a lot of energy from the chaos of the start.

And so that all was fine with me. But now that we're three months into this journey, I'm beginning to speak into the world. My goal is to reach a hundred thousand people with this message with this platform, with this podcast, by the end of 2021. And I like whispered it very quietly in my head, in the shower to begin with.

And then I like set it out loud. To my husband. And now I'm beginning to speak it and say, this is what I want to do with this. And the power in giving language to it is that I believe the resources and tools and relationships and others who are connected to this message will help me carry the load in that goal.

If I can say it to them and I can say it out loud, this is what I'm trying to achieve. I want to reach a hundred thousand people with this. In the next eight months, how do I do that? I have no idea how I'm going to do that, but the how. Doesn't matter when you're goal setting, you have to hang onto the goal and then the, how will begin to reveal itself.