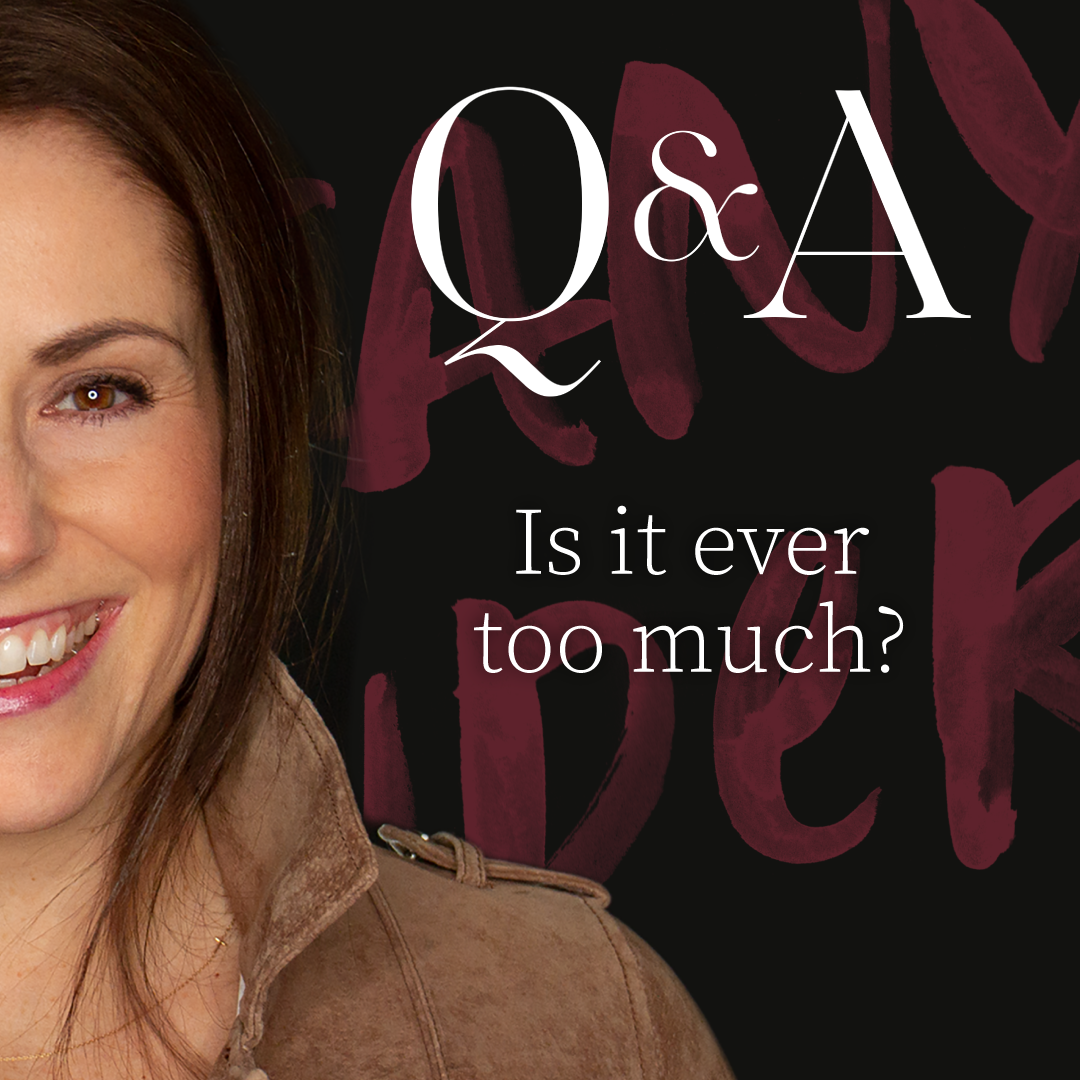 Yes, at times it feels like it’s just too much to handle, but it’s how you deal with it that matters. In this Q&A episode, Tiffany talks through what she does to avoid feeling constantly overwhelmed, which means sometimes you have to say "no."

“That's often when you figure out what you're really made out of because you have more capacity than you think you do. Some days it's just too much, and you have to do it anyway.” —Tiffany

Yes, at times it feels like it’s just too much to handle, but it’s how you deal with it that matters. In this Q&A episode, Tiffany talks through what she does to avoid feeling constantly overwhelmed, which means sometimes you have to say "no."

As you listen, think through the areas in your life where you might need to adjust to help you sustain the life you need to live.

I'm your host, Tiffany Sauder and this is Scared Confident. Decidedly. Yes. Sometimes it's just too much. And that's often when you figure out what you're really made out of, because you have more capacity than you think you do, but yeah, some days it's just too much and you have to do it anyway.

And that's how it goes. And also it being too much for a really, really, really long period of time is not sustainable. I keep talking about this theme of you have to get it to a place where it's sustainable. Otherwise you're not going to get there because you're going to burn out. Something's going to explode.

You're going to compromise on something that's really, really important to you. And then you're going to be pissed off because you got the wrong thing. So top of mind for me right now, seeing bill and Melinda gates divorce in the news, they don't owe me an explanation, but I keep thinking about man, wouldn't it be crappy to like, literally have anything you wanted, anything you wanted anything and not have love.

I just feel like it would really be crappy. I gotta be super pissed if that's where I got, I'm not opining on their situation, that's their situation. But for me, it's like, And that would suck. And so I think we have to understand that when it's too much, for a long period of time, something's got to give you cannot trick the laws of relationship and gravity for a really long period of time.

The other thing that I think when it's too much for too long is I've got two options. I've got to quit something, or I have to fix it. Those are the two options you've got to quit, or you got to fix it. And sometimes it's figuring out what do I need to say no to cause a perpetual state of yes, does not work, but again, or you just have to fix it and you have to figure out what's not allowing you to have enough margin so that you can keep.

Giving the thing that you want to grow more of your energy. I read this article who, who knows, sorry, I can't give attribution to it that talked about people who train physically like their athletes, performance athletes, professional athletes, they take as their is as serious about their training, the like friction load weight that they put their muscles under as they are about their rest.

Let's be great, but we're really not very generous to ourselves when it comes to what is a state of rest and need to be so that we can show up really well from a performance perspective. And again, for me, some of my things are, I don't watch TV during the week in the evenings. I found that to just be a massive time, suck for me instead of just go to bed, my husband and I get away.

A lot compared to, I would say other people that I talk to, and that's probably three to four times a year and it's not always for a long week. Sometimes it's just a weekend, but that just recharges us. And that's really important. So like spending the time and money on that. While always it's inconvenient a hundred percent of the time.

So. Figure your thing out. Is it ever too much? Totally. And you're going to hit that wall a lot. If you have a two career home knowing when you're getting there and you've got to back off, because this isn't going to, I can't heal in my environment. I can't recharge here. You got to figure out what your time out looks like.

And honestly, sometimes for me, it's like sending the kids to the basement, setting the hour, or like the timer for 90 minutes and saying like, I don't want to see anybody for 90 minutes. Like I just can't. I can't hear one more. Not mom. I can't get somebody a drink of water. I can't CMS. I just can't. I need you guys to go downstairs and that's fine.

They need to see that. That's okay. I need to recharge. I need to take a nap. I need to just close my eyes. I need to not hear noise, whatever the thing is and that's okay. And I tell them, I just maxed out guys right now and I need. To get my head back and then I'll be able to re enter our space, the happy mom that you want me to be.

I just need a break. And that's okay. I think it's good for us to be honest with our kids in that way, because it's a super normal part of being an adult. We don't have to pretend forever. The other thing I do, I find that this is a little bit of a tangent, but I find chaos in my space. Gives me less mental capacity.

So like when every surface has crap on it, when everybody's shoes are not on the shelf that I paid to be built, when everybody's backpacks are on the laundry room floor, for some reason, I just can't when that's the case. So I've got three girls that can lift things and me, and I'm like, if everybody gives me half hour, that's effectively two hours of cleanup.

So we're going to. Turn on the timer on Amazon, we're going to play some tunes and everybody's going to give me a half hour and I'm gonna make it a little bit fun, but we're going to get scrapped cleaned up. And then I just find it clears my head so much. So that's also, I have learned when I'm like real, mentally fatigued, sometimes it's because I'm tired.

And sometimes it's because my space is chaotic and I need to clean it up. And I have learned, it's not always my job to be the maid. Like I'm not their servant, I'm their mom, but they can help too. And so that helps. Get the space tidy. When you have to clean it up, you're better at taking care of your crap when you walk in the house.

Cause you understand it's annoying to have to redo that. And that also has been a little hack for me. That's helped me and some more capacity.

So what else is on your mind? Text me at  317-350-8921. And be sure to follow along on your favorite podcast app. Thanks for listening today.