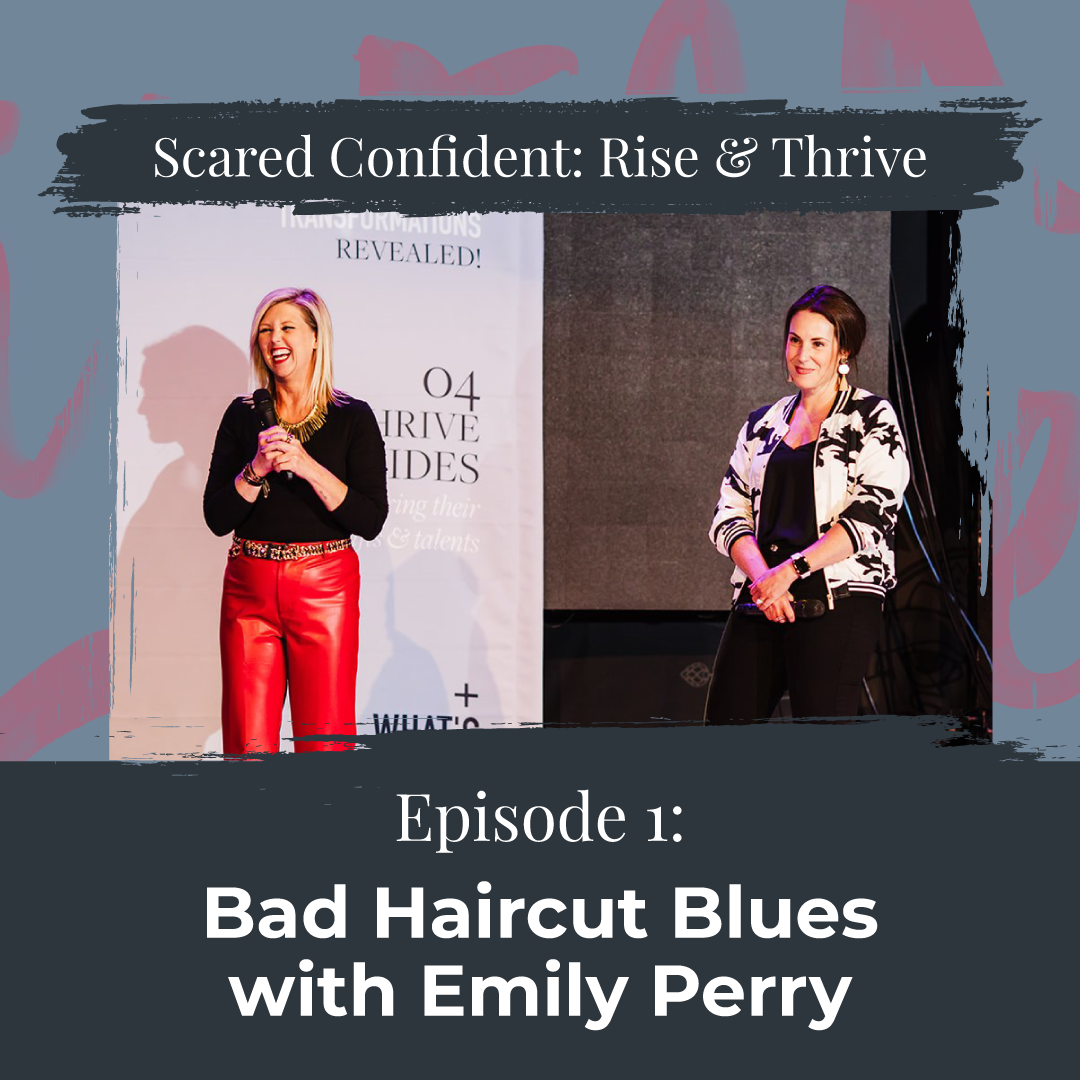 As a child, Emily Perry was bullied for her bad haircut and boyish looks. Now, she is the Founder and Executive Director of Susie’s Place, a child-friendly center for investigations of allegations of crimes against children.

“I pushed down all of those really hard things, and I just kept moving forward. I did not take time to investigate what those things meant for me, because I didn't want to feel it.” —Emily Perry

As a child, Emily Perry was bullied for her bad haircut and boyish looks. Now, she is the Founder and Executive Director of Susie’s Place, a child-friendly center for investigations of allegations of crimes against children.

If you’d like the chance to take part in your own fear interview like Tiffany did for Season 1 of Scared Confident, text the word FEAR to 317-350-8921.

Tiffany: I'm Tiffany Sauder, and this is Rise & Thrie. A mini series from scared, confident, where we highlight the stories of seven remarkable women as they learned to stand tall. And. In this episode, you'll hear from Emily Perry, Executive Director at Susie's Place.

Emily: So my mom always gets mad at me when I talk about my horrible, terrible, no good, awful haircut that I had throughout my entire childhood.

If you can imagine I was a little on the shorter side. A little on the rounder side and I had this thick stick, straight, dirty blonde hair and a legit bull haircut. It looked like my mom had put a bowl on my head and hacked her way around my hair. It was awful. I don't think I realized at the time just how bad that haircut was.

But I am a hundred percent sure that it is the number one reason for most of my childhood turmoil. When I was five or six years old, I was going to the library. I was being my kind little self walking up to the library and I held the door open for this little lady. She bent down as sweet as could be and patted me on the head and said, what a sweet little boy you are.

And I was crushed for my 12th birthday. We went to Cheddar's restaurant. Super cool restaurant had these big fans in the ceiling and these giant fish tanks. I was so excited. We had gotten a new outfit. It was a little skirt and a top.

I had just gotten my ears pierced, which was a super big deal. I was just on top of the world. The waiter came around and since I was 12, I was ordering for myself. It was probably some chicken tenders and fries. And the waiter said, thank you, sir. And I was crushed. So I had probably been called a boy, maybe 50 ish times in my childhood, and I blame it on that damn haircut.

Y'all probably know where this is going and you are correct. So my friend and I decided that we would three-way call a boy. He was cool. I so wanted to be cool. So the agreement was she was going to call and do all the talking. And I was the listener. She called, they were chatting. He said, what are you doing tonight?

And she said, I'm spending the night at Emily's house. And he said, How can you even fit in the house with her? She is so fast. It was tough. Y'all that one hurt. So I had been called fat a lot of times in a lot of different ways, but that one really hurt. So in all honesty, that shitty haircut and that three-way call experience.

We're just reminders of what was a really hard time in my life. It was littered with lots of hard things that were happening. And I'm going to guess that each of you probably have a shitty haircut or a three-way call experience too. So I will tell you what I did. I pushed down all of those really hard things.

And I just kept moving forward. I did not take time to investigate what those things meant for me, because I didn't want to feel it. the first chance I got. I buried that little girl away and I focus my eyes forward and I just worked to start achieving, I played sports at the collegiate level.

I got a master's degree traveled across the country twice for my career. I got married, had two amazing voice. I started a nonprofit organization. called Susie's Place.

It has grown and flourished because we have rockstar people on our board. I became noticeably accomplished in my field and I've won lots and lots of awards. So ironically, what I chose to do for a career is I am a child forensic interviewer. Which means I investigate crimes against children. I talk to kids every day about their really shitty childhood experiences.

Every time I go in the room with a kid, I want to be a hundred percent sure that they feel seen. They feel heard. That they are safe, that they know that they are valued and important. And for my own children, I know the greatest gift that I can give them is the gift of a childhood, a childhood where they know what it feels like to be loved and to love themselves wholeheartedly.

And I know that my parents wish that for me too, but somewhere between that shitty haircut and that three-way call experience, I started to feel really ashamed of that little girl. When I was getting ready to tell this story to prepare this, I was out to dinner with some of the ladies. And I showed them a picture of that nine year old girl on my phone.

One of the ladies was like, why wouldn't you have that out? Why is that so easily accessible? Why are you showing that around? And I know she was saying that because she was trying to protect me from retraumatizing myself again and again, by looking at that chubby little girl with the shitty haircut. But what she didn't know is that I don't want to forget that little girl.

I want to love her because she's me. And if I could go back and talk to her, this is what I would want her to know. She will make it through all of her hard times.

I see her, I value her. She's a part of me that deserves love. She is kind and smart

Emily: strong and resilient and above all. I'm going to make a promise to her. That I'll never bury her away or feel ashamed of her again.

Tiffany: No matter where you are in your journey, community is so key for where we're all going. And I'm on a mission to reach 100,000 people with this message of being scared, confident. So I would love it. If you would share your favorite episodes. With your friend, just pull up your text, send them a link. It'll take like two seconds the show isn't about me.

It's about helping other people on their journey of living full and complete lives. When we stepped totally and into an understanding of our fear, we can step fully into our stories as a thank you. I'm giving one fear interview to Alyssa. Put your name in the ring by texting me the word fear to 3 1 7 3 5 0 8 9 2 1.