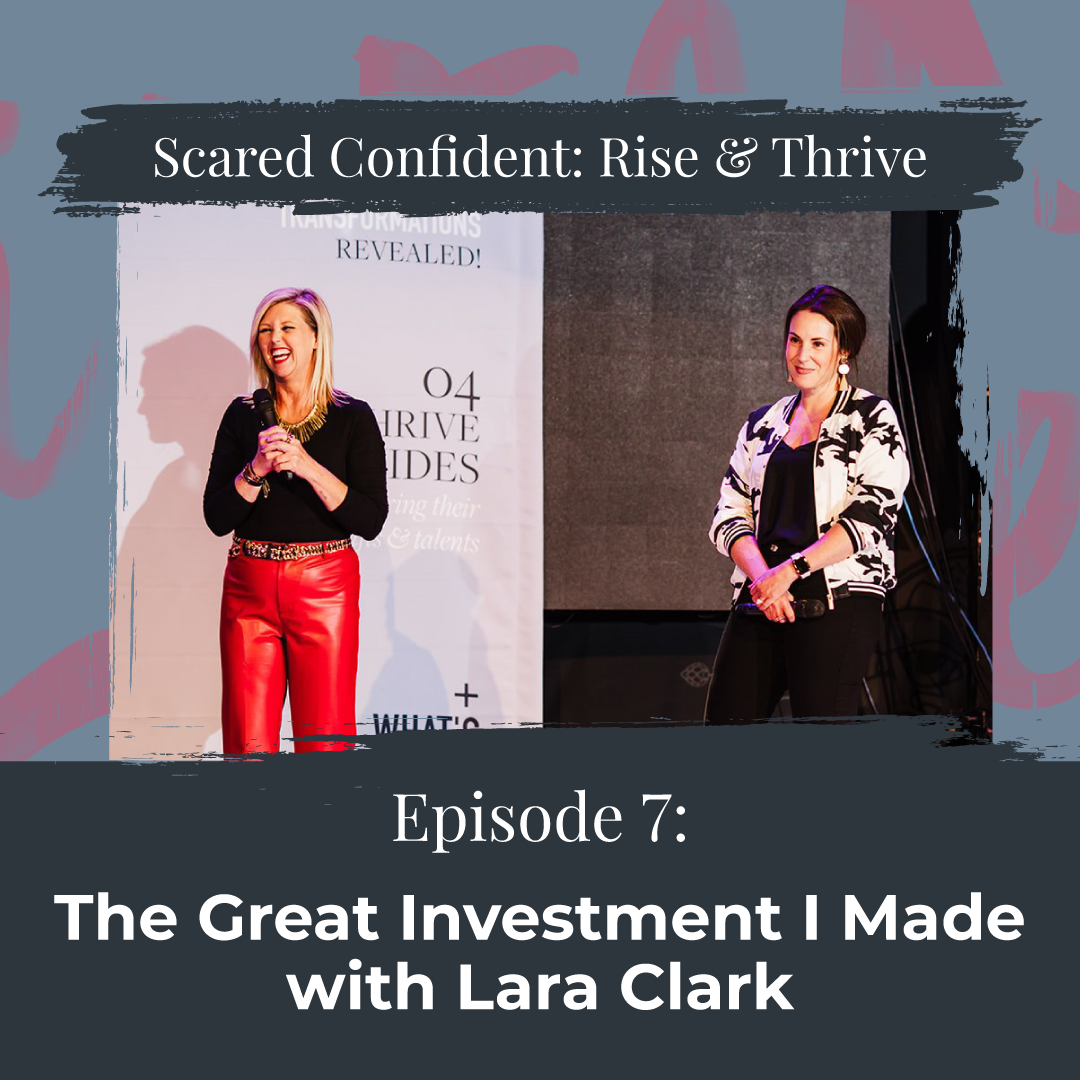 Rise & Thrive: The Great Investment I Made with Lara Clark

Have you stopped investing in yourself? While waiting for her daughter in the gym parking lot, Lara realized her life had become focused on everyone but herself. At that moment, she knew two things: that wasn’t always the case, and something had to change.

Sometimes, investing in yourself is about making small intentional changes. For Lara Clark, Account Executive at Expedient, it was about focusing on the little things she could do right now. Listen as she shares the moment she decided to invest in herself, and the actions she took that made a difference.

The Great Investment I Made with Lara Clark

Tiffany: This is Rise and Thrive, a mini-series from Scared Confident, where we highlight the stories of seven remarkable women as they learned to stand tall in their story. In this last episode, you'll hear from Lara Clark, Account Executive at Expedient.

Lara: I bet many of you had to perform, schedule, logistic gymnastics to get here tonight.

I bet you had to make arrangements to get your children to activities, to make sure they get to A to B and fed and back home. Who knows what you devoured to get to this event here on time. You invested in yourself by being here tonight. And I've invested in myself, too. As working parents and mothers, we really can have it all by doing the little extra things.

Let me tell you what worked for me. Picture this: it's about five or six years ago, and I'm sitting in my car outside of a gym, waiting for my daughter to get done with some kind of practice or training. I'm probably on my second or third Diet Coke, eating some gross expired snack I found in my glove compartment.

I'm fighting the urge not to go blow another $100 at the nearby Target.. This isn't new for me. I've done this many times a week for the past few years. Something was different this time though, I started to think about all the things I was doing for my daughter. We were driving cross country from gym to gym. We had hydration plans, meal preps, extra cardio, weightlifting, anything that I could do to give her an advantage.

Then it occurred to me. What if I put that focus and energy into my life? Wouldn't focusing on my health and fitness help me too? What if I focused on my career and put in some extra work? Wouldn't that yield positive results? So with "Uptown Funk" playing on the radio, I asked myself, when exactly did you stop focusing on you?

I used to be an active participant in my life. Like when I used to sing and dance in front of my bedroom mirror, thinking I could be as good as Janet Jackson and Madonna combined. Not, not one of them, both of them. I can't sing or dance, but that didn't worry me at the time. Those were just small details.

Or when I used to write to Joey McEntire from New Kids on the Block.I would send a mail and pictures just knowing he would like me if we could just meet.

I was focused on me when I found a volleyball scholarship for myself, from my small town in Canada. I did that by going to the guidance counselor's office at lunch and sifting through a book that had to be this thick. I would mail VHS tapes to the colleges with my highlights on them with, "I like to move it, move it" playing in the background. It's true story. Or when I overheard my college coach tell my parents that I wouldn't see the court until I was a junior, I immediately got to work, started in every game and became captain. Yeah.

It wasn't all bad. Right? I was good and comfortable in my job. I had earned like five president's clubs in a row, but who's counting. I had implemented like 3.5 million in services. I didn't love the way I looked, but I told myself this is Indiana, right? Not Malibu or South Beach.

I was overeating, not working out, not seeing my friends, and quite frankly, I was bored. What happened to me? When did I stopped being a complete human for the sake of my kids? Then I got pissed off. Y ou're telling me the girl who thought that she could be Janet Jackson and Madonna is now too shy to dance with her son and the mother, son dance at school.

What if I did bump into Joey McIntyre, was this the package I wanted to present? You know, with like Twinkie crumbs here on the side of my face? No. Was yelling at basketball referees really the most memorable and impressionable thing I want to do in the world? I am good at it. And when was the last time I read for pleasure, let alone serve someone else? So after that moment in the car, I started to do the extra little things for myself, tiny, tiny, tiny things, because let's face it being a single mom of three kids is really hard.

I started walking for 20 minutes every night. Let's not get crazy. There was no running and zero sweats were broken.

I did start eating better and seeing my friends intentionally again, I also look for opportunities within my career to fight for the underdog and serve the little guy I began to embark on a new career in technology. That would take me way outside of my comfort. Two years ago, I began a new role at Expedient and this role allows me to use my strengths as well as learn new skills.

I didn't stop there though. I explored Rise and Thrive and I'm so thankful that Expedient has supported me in this journey. I formed a women's group at Expedient where no such group had existed before.

Most recently, guys, I shocked myself by earning a cloud certification. And let me tell you, I would have been voted least likely to be studying on the weekends as a grownup. It's not all roses guys. I know we're at the Vogue and I'm the last speech, but Joey McIntyre, isn't about to join us on stage and I'm not about to do a dance routine that rivals Janet Jackson and Madonna.

I still drink too much Diet Coke and eat the occasional packaged snack. I still yell at basketball referees, and they still yet to thank me. I am however, an active participant in my life again, by doing the extra little things. So if you're sitting there thinking, you know, I'm drowning in my kids' schedule too, or maybe I've lost a little bit of myself somewhere along the way.

Or I'm thinking of trying something new, but I just don't think it will work. I'm here to let you know that it will. If by doing the extra little things can work for me, it can work for you, too. Thank you.

Tiffany: No matter where you are in your journey, community is so key for where we're all going. And I'm on a mission to reach 100,000 people with this message of being Scared Confident. So I would love it if you would share your favorite episode with your friend, just pull up your text, send them a link. It'll take, like, two seconds the show isn't about me.

It's about helping other people on their journey of living full and complete lives. When we stepped totally and into an understanding of our fear, we can step fully into our stories. As a thank you, I'm giving one fear interview to a listener. Put your name in the ring by texting me the word "fear" to 3 1 7 3 5 0 8 9 2 1.