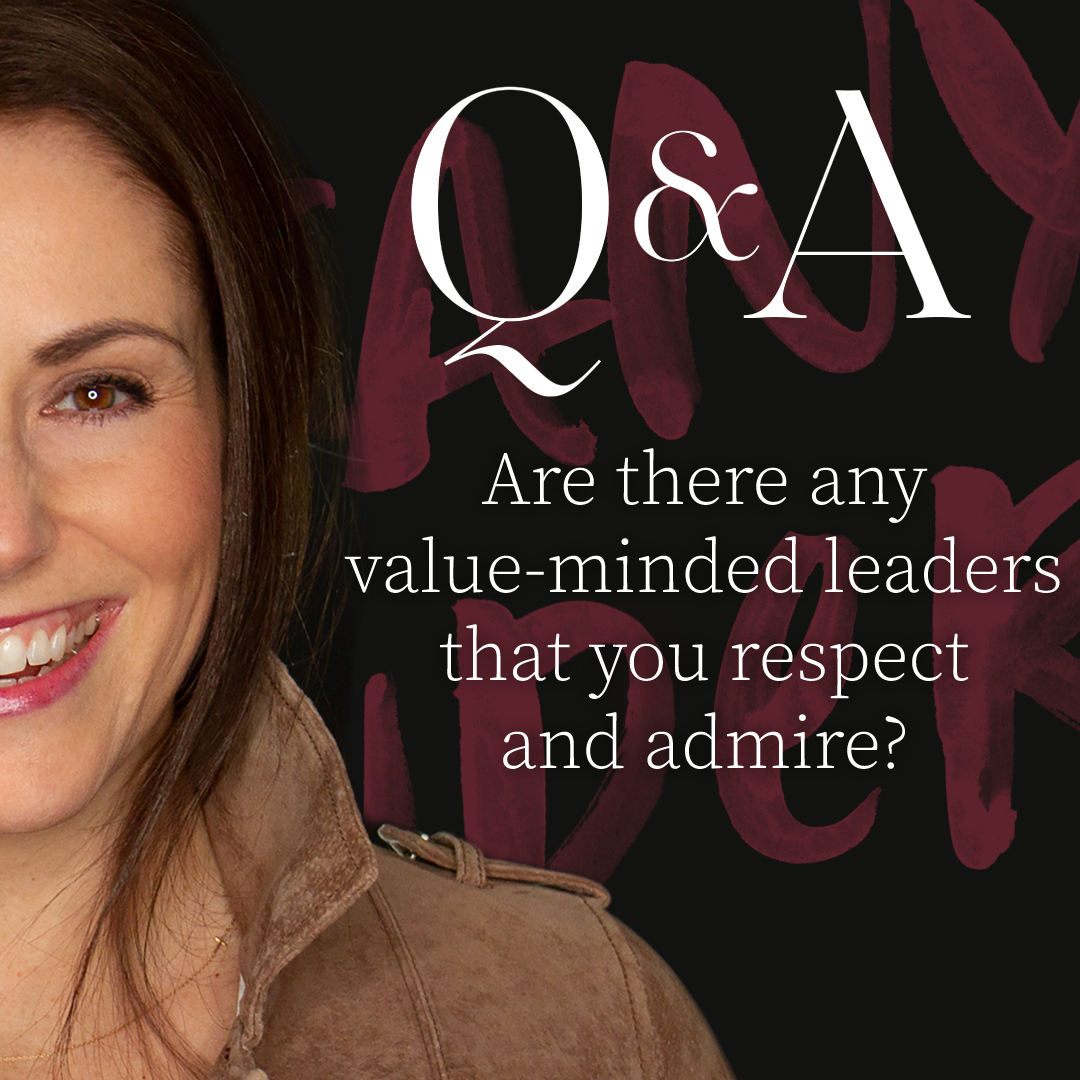 Values Q&A: Are there any value-minded leaders that you respect and admire?

For our final episode on values, Tiffany answers, “Are there any value minded-leaders that you respect and admire?”

For our final episode on values, Tiffany answers, “Are there any value minded-leaders that you respect and admire?”

Who is the leader behind the insight that inspired Tiffany's values? Take a listen to this Q&A series on values and let her know your thoughts. Text her: (317) 350-8921.

Values Q&A: Are there any value minded leaders you admire?

Tiffany: I'm your host, Tiffany Sauder and this is Scared Confident, a series about Values, answering your questions. Today we are talking about leaders that I aspire to be like or learn from and how it has informed my own values driven leadership. My first recollection of even seeing this idea of values-driven leadership, or a leader who made a really significant decision off of his values, his or her values, instead of maybe what made sense from a business perspective, it's actually from a book that I read that Howard Schultz had written.

You spoke about, and I, this is probably 15 years ago, so who knows, maybe this isn't even the story, but it's how I remember it. They were looking at going into South America and opening up Starbucks stores down there. He had, you know, somebody had paid for a bunch of research to be done on the market about whether or not it was receptive to the brand and the product and all of this. The research came back and said people would love to drink coffee at Starbucks but they will not come if you don't allow smoking, it's just not going to be a thing. He had the courage to say, well, we don't support smoking and I want to go into South America.

We are going to open up non-smoking Starbucks stores. That's what we're going to do. I remember thinking about that so many times because not only they paid for the information that allegedly told them the answer, and he said, my values don't agree with what the research is saying. I'm going with my gut. We're going with our culture. We're going with our values. We're going with what we know. We believe we'll be successful because that's who we are in spite of the risk that was clearly articulated as related to market acceptance. I just thought that was incredible. I remember thinking, I mean, this was probably 15 years ago, I remember thinking, when will I be clear enough in my own core, as a leader, that I would have the courage to be able to make a decision like that – because I'm sure there was a great big conference room full of important looking people that he was effectively paying for their advice. He had the courage to stand up and say no. That's like, what will we learn?

What will we believe to that level where we're willing to make decisions in the face of conventional wisdom or the advice of the people around us. That story stuck out to me. For me, I think, as I look at sort of these mentors or leaders, like our children never met the man, he has no idea that I exist on the planet and that's perfectly fine, but in many ways his story has mentored me.

And then there's also those leaders close to me, at my, sort of, they're more central, and I think the thing I watch most is the way that they lead their people. That's kind of a passé thing to say, like, we'll, I'll be like, yeah, that's what leaders do, they lead people. But as a leader, you have decisions that are things like, am I in it for the long haul with my employees?

Are you going to be in a local for the long haul with them and work through that? Or are you going to replace them more quickly because you're going to be more production-oriented? I think we can talk about the story in a way where we really glamorize the person who has a long-term view of talent, where it's like, are you gonna have a long-term view of the human, or are you gonna have a short term perspective on the business where you're demanding performance? Like, well, when you talk about it, that way, you're sort of leading the witness to the quote unquote right answer, but I've seen both models actually be very successful financially and culturally, high-performance cultures.

Don't take the long-term view on people. They bring them into high pressure, high performance cultures. They create an environment where that's the expectation and the sort of rewards and culture reflects that. They can both be successful. So those are things that I watch and think about in, they can both be right, but what is right for me?

As you're listening to this, what is right for you? I think our job as leaders, and it can be kind of hard because you do feel a little bit like you're testing it out, right? You don't have a, I always joke, if I have 15 years to run Element Three and learn all the things and then I’ve got to start back over at 25 and go from 25 to 40 again.

Wow. I'd be so much better at second time around, but that's not how it goes. We are experimenting and learning in real life. I've talked about my own personal values, these set of six, and really thinking about how do those apply to the decisions that I make as a leader, and some of those are the ways that I show up.

I talked about staying scared, about pushing bravery into our culture so that people understand. I had this conversation with somebody yesterday. It's like, you understand that I will never, ever, ever, ever fire you because you made a mistake on something. I will never do that. You can rest in that safety.

That's a core value of mine, that I want to be scared. I understand there's risk-taking and testing and piloting and uncertainty. When you choose to live in a world that is about staying scared, and so to force, invite my people into that domain with me, I have to remove the risk for them. I have to have them understand this penalty will not be here. In fact, you'll be rewarded because we pushed the boundaries of things. I think as leaders, we have to think through how has that come to bear, not just in our own minds, but how do we bring it to life really intentionally for the people and organizations that we lead.

Candidly, this is still such a work in process for me. I feel like I'm getting new understanding every year of what it means to really drive and build a culture. As I get further and further out of the work, like I'm not functionally pushing buttons on marketing anymore, you have more time and space to say my job is to lead.

Well, my job is to create a crisp articulation, understanding, of what it means to live in and excel in our culture. It's difficult to make that explicit because oftentimes, for us as leaders, it's very much intuitive to who we are. It's an extension, these companies that we're building. But we have to understand, we will never be able to create or lead or build something that is beyond what we are.