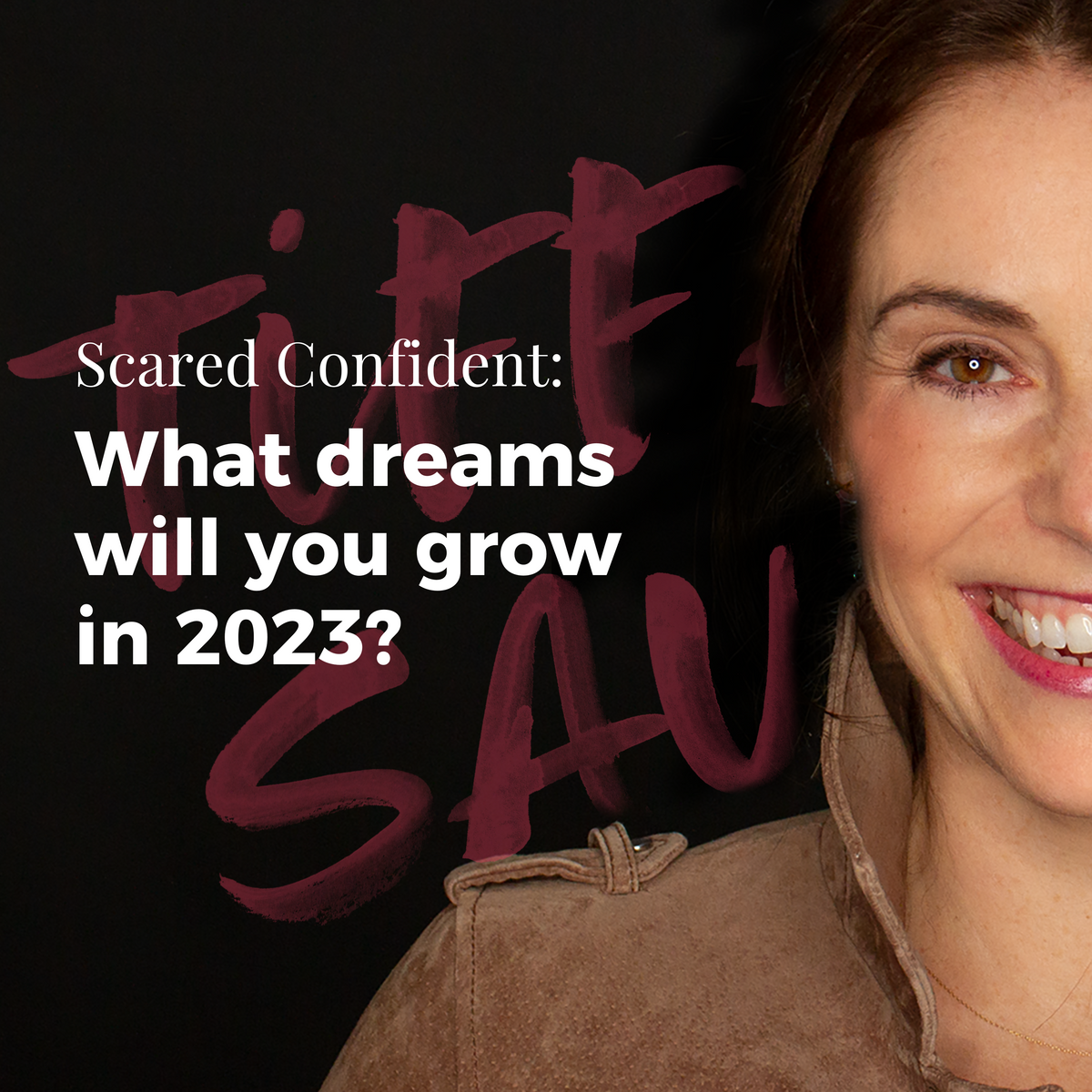 In this solo show, Tiffany is taking some time to reflect on those "carrot seeds" that she's planted in her life, and why acknowledging your own needs is so important in seeing those seeds sprout. And, Tiffany's 7-year-old Ivy shares a story. Sometimes the most inspiring messages are from the littlest voices. Thanks for listening, and happy holidays!

"What is that thing that you've planted, watered, tended to, wished for, and know is going to happen...but the people around you maybe can't see it as vividly?"

In this solo show, Tiffany is taking some time to reflect on those "carrot seeds" that she's planted in her life, and why acknowledging your own needs is so important in seeing those seeds sprout. And, Tiffany's 7-year-old Ivy reads a classic children's book: The Carrot Seed by Ruth Krauss. Sometimes the most inspiring messages are from the littlest voices.

Thanks for listening, and happy holidays!

For more from Tiffany, sign up for her newsletter.

Tiffany Sauder: I don't think it's possible to get to the end of the year and not think about goals in some aspect or think about dreams or just generally pause and kind of take stock of like, am I where I want to be? Am I where I hope to be? , my seven-year-old daughter Ivy, she's in first grade and still very much learning how to read and they bring home these silly little books.

Sometimes they're named something so weird, like it's about a tooth or something, cuz they're trying to learn different like phonic sounds. And she brought home the most precious little book and I couldn't help but. Pause and reflect on the message. So listen, Ivy will read it to you.

The little boy pulled up the weeds. Around the seed and sprinkled the ground with water,

but nothing came up Every, everyone keep saying it won't come up, but he still pulled. Up the weeds around it every day and sprinkled the ground with water.

And then one day a carrot came up,

just as the little boy had known it would.

I have definitely had seasons of that in my life, , where I just knew something was gonna grow, but I couldn't explain when it was gonna happen. I just knew I had to keep working, and so I just want this year end message to be an encouragement to you. That if you've planted a seed, if you've planted a carrot seed and you're tending to it and you have hope in your heart, and you have a vision and excitement for what you know it can be to keep tending, don't stop success.

I'm mixing all my produce analogies, but you get the idea. It's not linear. So I just wanna encourage you in your dream, in your carrot, keep going, keep dreaming, keep tending. Even if the people around you can't quite see it the way that you can. The other thing I'm just reflecting on right now, my husband and I recently went away for a couple of days, and I.

Prepping my kids for, you know, all the things, uh, who's gonna stay here, what the schedule was gonna be when we were gonna return. And I was getting ready to leave my oldest daughter's room just saying like, Hey, is every you good? Like you feel square? And the last thing she said to me was, have fun, mom.

And for some reason that phrase just like stopped me in my tracks. I don't know that I would've ever told my mom to have fun , but one was that like she saw me as a person who needed to go have experiences of my own. it's important to me that my kids know like I love them so much and I want to help make life.

I don't know. It was just like such a moment where I was like, she sees me as a person and. My husband and I, her dad and I, we just need to go have fun and we need to go be people together and they're gonna be okay and we're gonna be better when we get back. And, anyway, I don't know. It was just a really special moment for me to hear her say those words back to me.

And if you're struggling with giving yourself permission to take time for yourself to work out or for yourself, To just have some quiet time or for you and your spouse to go away and do something together. Explain to your kids why. , it's not because I'm trying to make your we hard, like I'm gonna do everything I can so that it feels as normal as possible.

And you have Alexa reminder so that you don't forget your glasses and you know, I'll text you the night before to make sure that you remember you have swing choir early the next day. Like, I'll, I'll help you, but I'm a person too. And this is also my life. These are my years. This is the time that I get to grow and experience and.

Try new things and learn new parts of who I am and what I was made to be. And part of what I was made to be was their mom. Absolutely. And I wanna deliver well in that role, but it's not the only dimension of me. And I think if I've, as I've gotten more comfortable in the call on my life to be, A professional person, , as well as a mom and a wife, and like domestically doing, um, you know, the things in my house.

Well, as I've got more comfortable with that role, I've just tried to, I don't know, like assimilate it more to my kids so that they understand how it fits in the context of our life. Instead of like, mom goes to work, it's this black hole of things that I do and when I'm gone. , you're being watched by somebody and then I'm back and we're a family.

It's like, no, this is all part of who we are and the way we operate. I don't know if that makes any sense at all. Sometimes in podcasting, I wish I had the advantage of your body language to see you either nodding your head or like furrowing your brow cuz you have no idea what I'm saying. But anyway, that's all.

It's on my heart right now. I also went back and listened to. Episode from 2021 when I was setting my plans for 2022, and looked at my goals and I had three of them. One was for content creation to become more of a habit and more connected just to the message and less connected to my ego. And I feel like I give myself like a B on that, honestly.

it's my, more natural state is to talk and not to really sit and. Listen well, and so wow. Another goal was to listen to my husband better, like when he's processing things at work. And not to be like, just not to be mentally distracted, but to be really present for him. And I asked him how I did and he said I didn't do worse.

which is like the sourer version of a compliment, I think. No, he said I wasn't worse. He's like, definitely, he said same to better, definitely not worse. So I'll let him give the letter grade, I guess, on. My third goal was, I had consciousness that I, my schedule is gonna be shifting coming into 2022, and so my third goal was to be more time available for my middle schoolers. So for me that meant just having more flexibility like after school, like after four 15 when they got off the bus.

So I'm getting more comfortable with it. I think I'm getting more systems in place to be able to accommodate it, and it's been good. I feel really close to them right nowUh, my goals for 2023, I'm still working on them. I would say, I know one is I just wanna be intentional about having something fun that I do.

Like for myself, that's not like a productive task, but just like literally something fun. And I have some ideas, but I would say that's one theme that's top of mind. It's probably gonna be a January to do for me. Maybe over Christmas I'll have some time, to reflect, but. Anyways, we are closing out 2022.

We, doubled our downloads this year. and I just wanna thank you guys for coming along on this journey with me. When I started it almost two years ago now. March will be two years, March, 2023. Wild. I had no idea what I was signing up for. I just knew I had things that I needed to work out, and you guys are such gracious listeners and going on this journey with me for everybody who shared it with a friend.

So, Thanks for listening. Continue to give me feedback. It really does feed us as creators to know that it, what we're doing matters. And, I'm really excited for 2023 and seeing what it has to bring. So, Merry Christmas, happy Holidays and Happy New Year to you and your family. Give everyone you love the tightest squeeze this season.

Thank you for joining me on another episode of Scared Confident. Until next time, keep telling fear. You will not decide what happens in my life. I. . If you wanna get the inside scoop, sign up for my newsletter. We decided to make content for you instead of social media algorithms.

The link is waiting for you in show notes, or you can head over to tiffany soder.com. Thanks for listening.