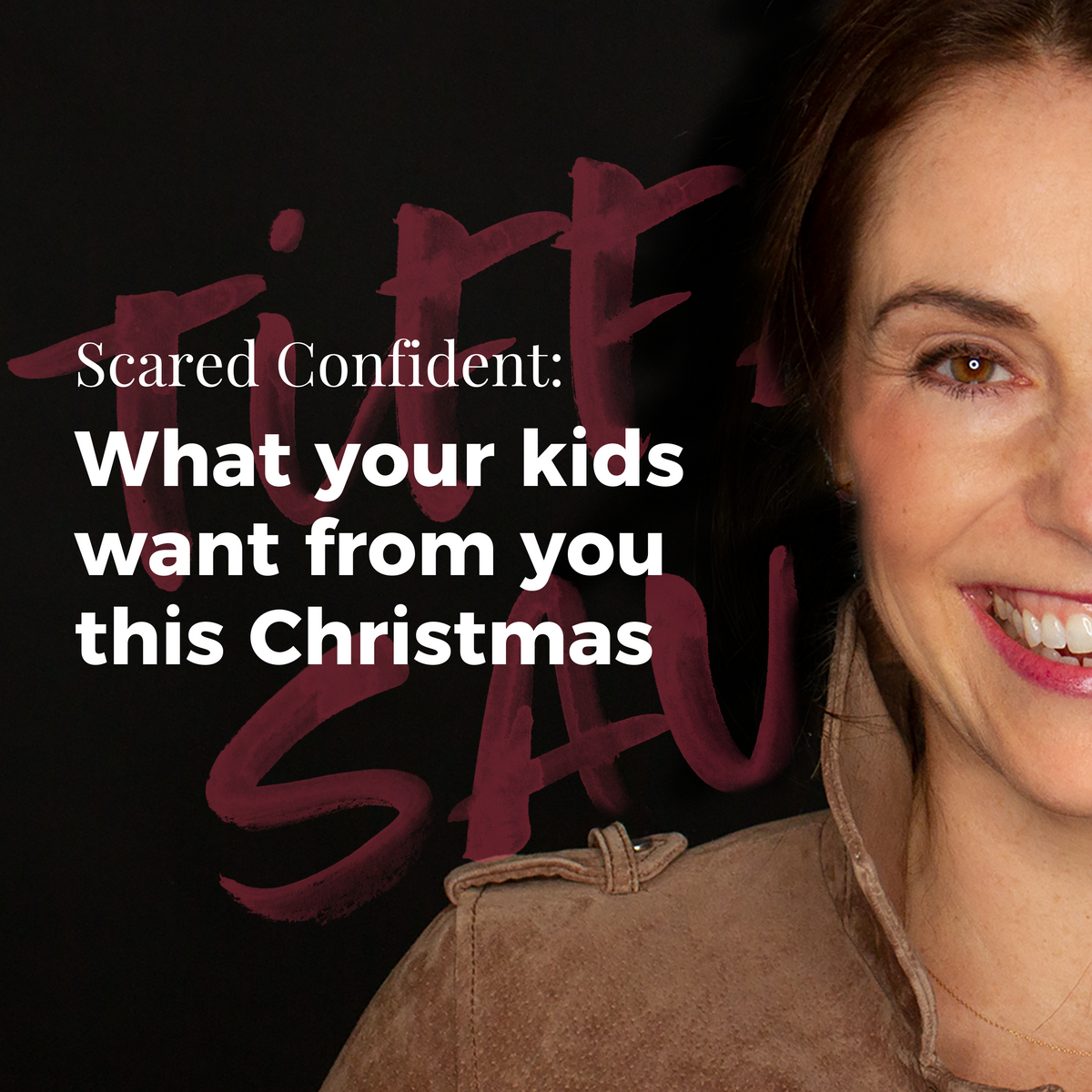 What your kids want from you this Christmas

Merry Christmas week! In this episode of Scared Confident, Tiffany returns to the mic after our latest takeover and shares some tips and tricks she's found helpful for the Sauder household in this crazy holiday season. And, she's asked some of the special kiddos in her life to sharing their advice for parents this week. It's advice you won't want to miss—enjoy!

Merry Christmas week! In this episode of Scared Confident, Tiffany returns to the mic after our latest takeover and shares some tips and tricks she's found helpful for the Sauder household in this crazy holiday season. And, she's asked some of the special kiddos in her life to sharing their advice for parents this week. It's advice you won't want to miss—enjoy!

For more from Tiffany, sign up for her newsletter.

Tiffany Sauder: Merry almost Christmas and happy holidays. I am recording this on the Monday before Christmas, and, uh, just excited. I feel like actually I have a ton of just excitement and anticipation, leading up in the next few days as we head into Christmas. And I hope that your family and you are feeling the same.

It's been a couple weeks since I've been on, the microphone here. Rachel Downey did an awesome takeover and um, it's great to be back. And, uh, thanks for listening here today. I, uh, you know, I'm sure like you have been definitely reflecting on, well, actually before I go there, this morning was hilarious.

I did not turn my video on because I look like. A Christmas mess, . Um, my middle schoolers like predictably missed the bus this morning. It's like eight degrees outside and they wanted me to drive to the bus and so we missed it and so I had to drive 'em. And I have on a robe and boots and like this black puffy coat and full face of makeup and wet hair

Whatever. It's a couple more minutes with them. So anyway, that's kind of the funny start to my morning. Um, But Christmas holidays, here we are. I feel like in seasons I have been a mad woman of to-do lists and um, the holiday season felt more like a burden of a bunch of stuff I had to check off than the ability to just like be present and like sit in the mess of it and.

Taken the smells and the sights and the fire and I don't know, just like all of those kinds of things there's been years that, that's been a real struggle for me. there's just been sometimes pressures on the business or, pressure on myself to just perform it all perfectly. And this season I really set my heart on just embracing simplicity and joy in this holiday season.

And for me, that's looked like. Intentionality, and finding time on our schedule because even rest has to be scheduled in our household to just be present with the girls. And so this weekend, I would say that was a real exercise of that. The girls all wanted to go to friend's house and JR was traveling and I said, no, we're just gonna be home and I wanna do some fun holiday stuff with you guys.

So, We did that and it was fun. We watched Christmas movies and dipped pretzels and chocolate, which is a far cry from fancy sugar cookies with frosting and stuff. I just don't have the capacity for that mess. And so I said, well, how do we just do like Christmas cookies? We keep 'em simple. And so we did something like that.

The other simple thing that I did this season that I will definitely repeat is the girls as they get older are excited about like buying each other gifts, butI don't have the time to take each one of them individually like to a store and have them shop and then bring them home and like do all of that. I just don't have. The time for that. And so what I did was we got up on Saturday morning and I said, girls, we're gonna get to the mall.

Like basically when it opens, because people don't get to the mall before 1130. And I took all four girls to the mall. We went to Nordstrom. I found this very kind. person who worked there and I said, Hey look, here's the deal.

My girls are gonna be shopping the store. I gave them each a budget. They wanna buy gifts for each other. They're gonna walk those belongings to this register and you're gonna check them out, help 'em, like wrap it in tissues so that their sisters can't see it, put it in a bag and then I'll come and I'll check out and they can buy something for me if they want, whatever.

And it was awesome. Nordstrom, during the holidays has, like a toy section and the whole nine yards. So we were able to. A ton knocked out the girls, had a little bit of independence and could go shop for each other. and it was amazing.

It worked so, so well. The girls got a chance to buy each other's stuff. They felt like they could do it without me, just Amazon priming everything or I just remember as a kid that like experience of shopping is just so very fun and um, it worked great. We were like, Totally done in like two hours and everybody was happy and I was not sweaty

And we even had Quincy with us a two year old. Um, and she's a little bit of a destroyer, but it worked. so that's a hack. I will do that again next year. And so if you've got big kids, little kids and they want, you could do Target.

It doesn't have to be Nordstrom. I just did that and go, it's like an off time. So anyways, okay. I'm done telling you the things to do. so one of the other things I am just like paying attention to what's going on. I thought, you know, sometimes we put all these pressures on us as an adult, like as grownups to make these magical over the top experiences and to do the Polar Express and all the Christmas shows and , Christmas dresses with frills and.

Bags from Santa, just like elf on the shelf, just all this stuff. I'm like, what do kids really want? And so I asked some of my nieces and nephews and some of my friends' kids, the question, what advice do you have for your parents during the holidays? And, um, they were so gracious and submitted back some answers and responses.

So take a listen to what the kids had to say.

Kids: you can make it fun by maybe going to Indiana to seeing your cousins and family.

stop checking their phone so much?

I would say that it's nice when parents set aside work and other things to be with their family on the holidays because I feel like it gives kids like the sensation that their parents want to be with them, like for fun. And it's fun to like all be together with like the parents not stressing about work or anything.

And same with the kids, just like kind of putting us at school and like that sort of stuff and just being together.

Tiffany Sauder: My takeaway from listening to what these kids had to say is that they really want our time and attention. Yes, there's a smattering of gifts, and I think some of it for a kid, at least my observation in my own house, is it's less about the stuff and it's more about the anticipation of like being known, being seen, and knowing that somebody thought about you to give you something special.

I think that's as much. Why gifts are important to kids is like the stuff I see that, especially in my third one, she's very easy for me to overlook. For reasons I don't totally know. I just think I sometimes expect her to just go with the flow. And when I have something that is, especially for her, it makes her feel so special and expected.

And, um, I really think that's what kids want. They want our attention and they want our time and they want us to know that we know them. And so this season I'm really challenging myself to have moments where my kids know that I know them and. Putting a little less pressure on myself to make sure that all of the, like Pinteresty expectations of our home and the Christmas experience, some of that stuff I've let go a little bit this year.

Um, and I think we've all been better for it. I think the season has been a little bit more special and poignant. I'm also just trying to pause in the middle. We host a lot. I love to have people here in the middle of the chaos and just take little snapshots with my eyes of the corners of what's going on.

And that's a way that I've just set intention on embracing simplicity and joy in this holiday season.

I hope that this year you have felt yourself grow. I hope, that this podcast of scared, confident has been part of that growth journey for you, and I hope that in this season of. Joy and expectation, and those of us who are Christians, you know, as we sit and put our hearts and minds on the birth of Jesus Christ and what that means for freedom and hope and the ultimate gift and sacrifice that was given for us.

I hope that you take time for simplicity and joy and that you take time to tell the people around you why they're special to you and why you love them. I hope that this season, You exit it feeling full and loved so that we can enter 2023 and really step fully into the talents of who we are.

Thank you for joining me on another episode of Scared Confident. Until next time, keep telling fear. You will not decide what happens in my life. I. . If you wanna get the inside scoop, sign up for my newsletter. We decided to make content for you instead of social media algorithms.

The link is waiting for you in show notes, or you can head over to tiffany soder.com. Thanks for listening.