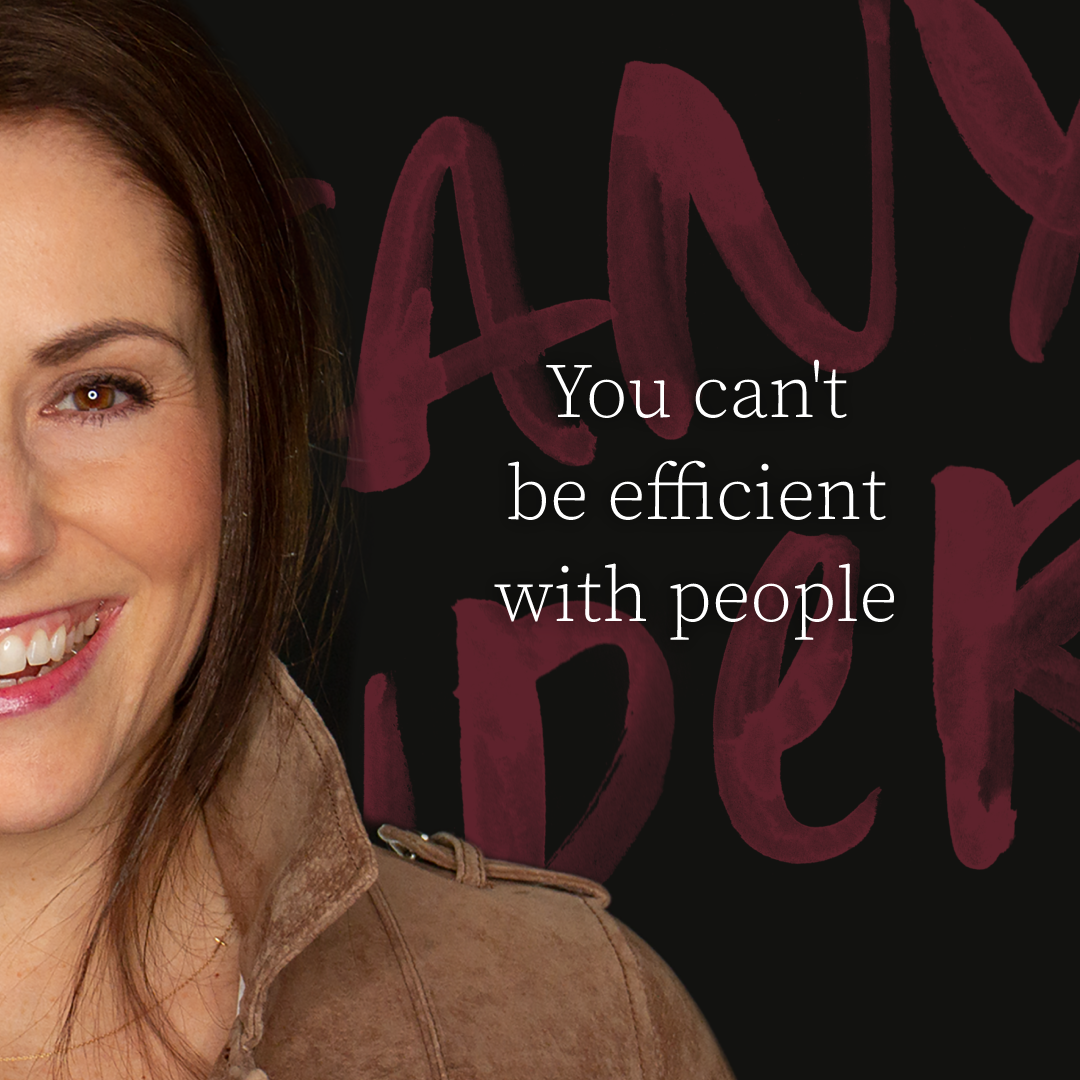 You can’t be efficient with people

Leadership is a slow, inefficient process. Yet, it’s important work that is worth doing. In this episode, Tiffany shares a lesson from Brian Kavicky that has significantly impacted the way she leads.

“When you try to be efficient with people, oftentimes what you're doing is saying your context must be the same as mine.” —Tiffany

Leadership is a slow, inefficient process. Yet, it’s important work that is worth doing. In this episode, Tiffany shares a lesson from Brian Kavicky that has significantly impacted the way she leads.

How are you underestimating the reasonableness and good intentions of your people? Text Tiffany at 317-350-8921.

You can't be efficient with people

I'm your host, Tiffany Souder. And this is scared, confident. This piece of advice comes from Brian Vicky. I've worked with him for about a decade, so there's lots of things that he has taught me, but the one that I reflected on as I was thinking about the series. This, you can't be efficient with people.

And here is the context at which I remember learning it. And then I'll talk through some of the sort of just modern day applications today. How I remember learning it from Brian, is that when you. Are trying to get in particular people to grow in leadership or young talent that's coming in, or somebody taking a new role or a great big client.

You oftentimes, when you're put in a position of leadership or helping them to get to another spot, you just know more than they do. And so what you want to try to do is rush them. You're sort of place of awareness. Like this is the lesson you need to learn. And what I was trying to do, I'm a three on the Enneagram and we're very efficiency oriented, I think about how to make things better and faster almost all the time.

And so the people who live around me, it was the same way where I was like, how do I be more efficient with them? And Brian had. You can't be efficient with people. We are by our makeup, inefficient beings. It's part of what makes us special, different than anything else that was ever made on this planet is that our minds make different connections.

I'm going to try to rush you to where I'm trying to get you. I need you to do this thing, learn this lesson, but what you have to do. Is leave like these little pebbles for people to be able to pick up and be able to gain context and momentum and experience impact of their decisions. And it is wildly inefficient, but it is still very noble and important work.

And I had to understand that those two things could live beside each other and be true. People are inefficient and it's still worth doing. 'cause in my mind, the way it naturally works, nothing is worth doing if it's not efficient. And so I was kind of subconsciously really being, I think a frustrated leader is because I saw this is a very inefficient process.

You mean it's going to take me two years for them to learn these four lessons. And Brian would say, that's exactly right. You can't be efficient with people. I see young talent come in and try to get clients or prospects to quickly understand a totally different perspective. And sometimes there's a lightning bolt moment, but oftentimes it's these slow pivots of trust-building and trying new behavior and abandoning some old perspectives or trying out some new perspective to see how that plays out.

And it's very, very, very inefficient. But it's still worth it. It's really noble work. I think we see this as leaders also, when it comes to culture, element three has been in places where our culture was just not healthy. And I wanted to say like, okay guys, like a whiteboard, wipe it clean. Let's put new things on it.

It's turning it slowly. And that is where real change, real impact can be made with people. And it really is one of those things in my experience, it happens like slowly, all of a sudden, and some of you listening may see this with your kids. It's like, oh, my word I've been. Teaching them the same thing over and over and over again, and they're just not getting it.

And then you look back and it's like six months ago, we were really dealing with us. And now we're not, I don't know when it changed, but at some point it did, this is like really silly, but my one-year-old, every time we'd go to change her diaper, it was like a wrestling match with pinch her leg. I would flip.

Hand, like I realize it seems extreme, but it's like, you've got to lay here and change your diaper. This is silly. And then all of a sudden she was just like done with it one day and it took a very inefficient discipline of cycles of pinching. I, and flipping her hand, if she would kind of go down and try to touch her gross diaper or whatever it was.

And then suddenly it was gone. And then it's like a silly example, but it's very practical way for me to picture. Even as adults, we need this like reinforcement over and over. And the one day we kind of get it, but it usually means we've tried on the thinking. I observed somebody else doing it. I practice the decision-making in my head.