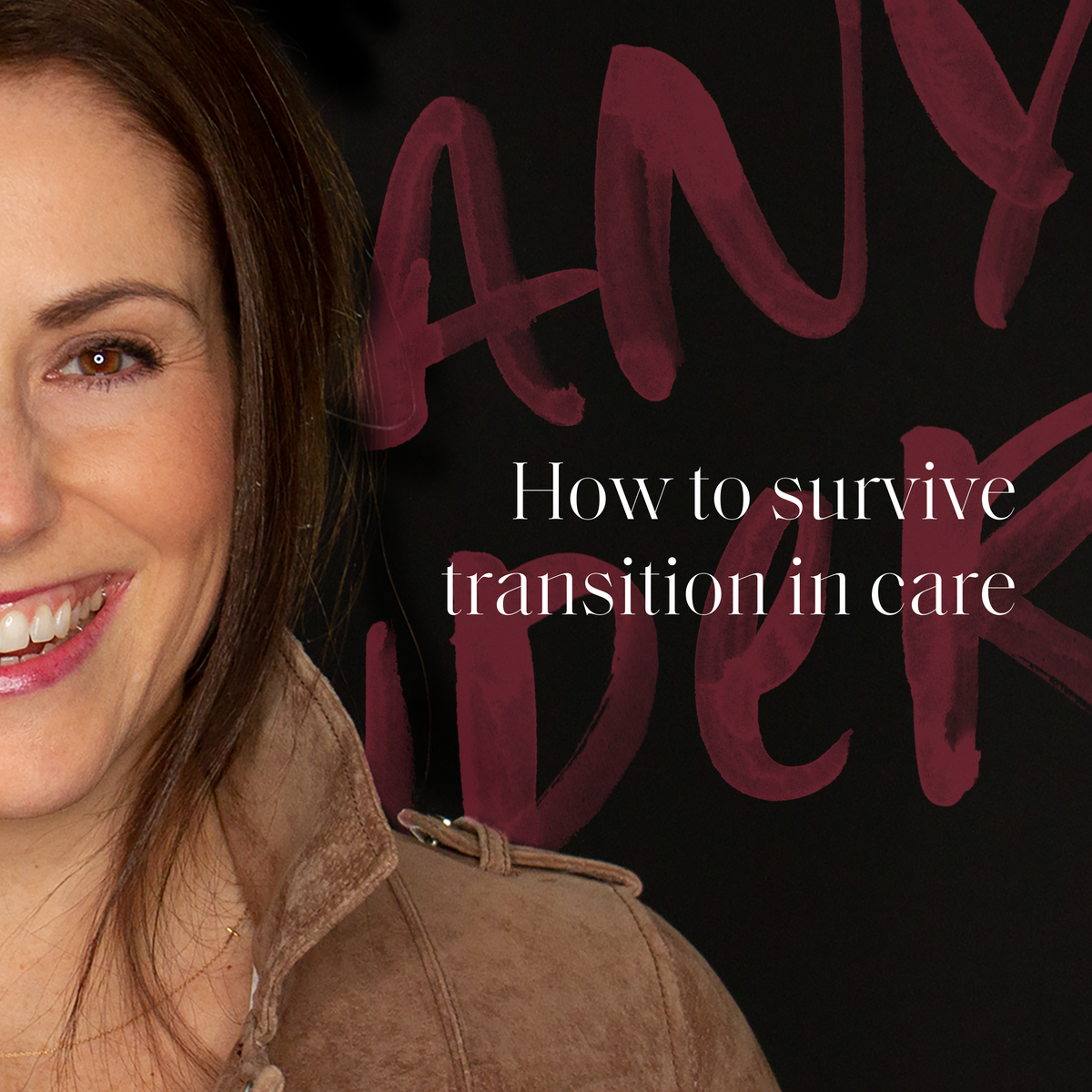 How to survive transition in care

Tiffany shares her experience in transitioning in-home care when their nanny, Mrs. Garcia, retired earlier this year. Listen to the full episode to hear how the Sauders approached and embraced the change.

When you depend on a person for in-home care and they can no longer help, what do you do?

Tiffany shares her experience in transitioning in-home care when their nanny, Mrs. Garcia, retired earlier this year. Listen to the full episode to hear how the Sauders approached and embraced the change.

I'm your host, Tiffany Sauder. And this is Scared Confident. I don't know that any of us actually ever imagined a hard time. My nature at least is to believe things are always going to be smooth and wonderful, but our nanny of almost eight years has had some things in her life. Kind of just accelerate and on a fairly short notice, she needed to step back from being with our family.

And so that left a big hole. She, you know, we are friends, she's just a part of our family. And we have like a routine together that is like an orchestra. We just really know each other. We know how to help each other. We were such a team. And so. Left our home at the end of January, the other is we have another young girl who comes into our home and just kind of helps fill in the cracks.

So help me drive the girls to practice of Jr's traveling kind of just she'll run errands, get birthday presents, kind of help us from that perspective. And she got mano and so needed to step back from being in our home for a few weeks as well. So in about 48 hours, The entire compliment of my care for the kids and help in keeping the house running really went away.

And so if you haven't home care and you imagine it all like the lights being turned out in 48 hours, you understand that. Holy crap moment, because my days are busy. Things are scheduled and I think it's all happening and then it's not. And so I kind of went through three phases. First was like, just, I would say general denial that this is something I'm going to have to acknowledge.

The second process was I would say just like some sadness again. Mrs. Garcia was. Deep part rich part of our lives and will continue to be, but not having in our home every day has certainly been a change for us. And then the last was like, kind of panic. Like what is going to happen when Monday comes, because I have a full schedule waiting for me and I have no one coming to help.

And I have kids that need to go to school and practice and all of the things that need to happen inside of our home. So I thought I'd share in retrospect, the process that I went through, we are still in this. Process of rebuilding things. And I think it's harder actually to talk about stuff when you're still in the middle of it, but I'm going to try to, so that air remember, and B it can be helpful.

Like it's not like, and Ted off things are perfect. Like they're not yet. The first thing was my attitude. I needed to, like I was stressed and that makes me short. And then I kind of turned into this like martyr in my home about like all the things I need to do. Do you see me doing all the things like they do, but they don't need to acknowledge it every time I do something.

So I was like, I needed to get my attitude. Right. It was not the kid's fault that this stuff changed. I don't need to bring this like world of stress into the home where they suddenly feel guilty for being alive. Like that is not a good outcome. And so I was like, you need to check your attitude, Tiffany, you need to like, make this as fun as possible.

So that was the first thing I had to get my own head. Right. So that I wasn't just like moping around the house and. A big grumpy cloud. The second one was that I kind of went into triage. I said, I think I'm going to need four weeks to kind of rebuild this. That was my first guess. I think I need four weeks of space.

So the first thing I did. Move or cancel anything like not a hundred percent critical that was on my calendar. You know, like networking meetings. There's some things that could be moved out without there being a lot of consequence to the business or momentum in the work, that kind of stuff. So move or cancel any non-critical things.

The second thing that I did is I knew I had a two hour window every day when Quincy was sleeping. And so that was going to be my most focused. Available time when there's not baby on the screen. And so all of my most critical things that required me to be on screen that required me to sort of be, I would say in more like executive presence, we moved into those two hours.

To the extent it was possible. Not everything was able to go into those two hours, but we tried to do that so that I could be present. I could be without a baby. I could be all those kinds of things. And then the third thing. I didn't see this at the beginning. I was like, I got to rebuild all the systems right away.

I started to see that was not going to be possible in a month. I was not going to find the perfect nanny, get them, trained everybody up to speed in the house, running again. And so I realized what I really needed was an interim. Solution to like patch the holes in the boat so that I could start to get some schedule freedom back so that I could process more in my day at work and also have the time that I need to like rehire a nanny or somebody in our home.

So I did a couple of things. One is I reached out to a service that does home management. So it's called my Sherry, like a lot of things. It's like, if you're hiring employees, you can either go out and do your own search or you can hire. A staffing agency to go find somebody for you. So my Cherie is essentially a staffing agency.

It's not how they explain themselves, but essentially for home managers. So I was able to turn that on way quicker than going through a whole process by myself. The second thing that I did is I reached out to my network and said, Hey, do you know of people who have some flexibility and some experience with kids that can come into our home, even if it was two half days a week to try to rebuild.

At least three days a week that I could work a full day over that four week period of time. So again, it was like, I think the thing I did that was smart, that is smart is to admit to myself and everybody around me. I'm not going to be able to be at a hundred percent over this small gap of time where I don't have the support that I normally do at home.

And so how do I set expectations so that we're not all in a perpetual state of frustration and irritation with one. It's temporary. So that's where we're at right now. We're mostly not grumpy. Things are beginning to kind of come back together, but it is kind of a patchwork job. It's not like things are not going to be as they can be for a couple of years.

And that now that's sort of the next stage gate of this is for me to really get clear about where I need support and to do a more formal search process to begin to rebuild that this is way too much detail like. But my older three are in school and Quincy will be two this fall. And so we're looking at sending her to a daycare so that all four kids are quote unquote in school, which just relieves our need to have a full-time nanny and have 75% of the kids outside of the house.

So that would be a new arrangement for us. We have. Put our name and a deposit into a spot so that we have that option. But again, it's like, I don't know exactly how it's going to come together, but I've got different things that could frame up. So that comes summer. The kids are all set and going to camps and doing the things.

And then when school starts this fall, we kind of have everything rebuilt and everybody knows what normal looks like. So this is just a window into the imperfect nature of a two career home. And how there are going to be seasons of transition that are a bit unsettling to everyone, but ignoring that there is impact is not productive.

And so I think the thing I've done well in this transition has been really explicit both at home and at work about like, this is exactly what's happening. This is a transition we're going through containing it inside of a amount of time to give me. Deadlines to drive at and to realize an interim solution does not need to be a permanent solution, but it does start to get some more momentum and like that Homefront flywheel.

So I hope this has been helpful if it feels like there's still a lot of loose ends it's because that's exactly where we are. There's still a lot of loose ends, but we're making it one of my favorite movies, the secret life of. And there's a scene where he's like, how am I doing? How am I doing? I don't even know the names of the characters because those things don't stick in my head, but he's like trying to swim the dog is, and he's like, well, his friend's like, well, you're not drowning.

And that's something. So it feels a little like we're not drowning and that's something, but that's the story. That's where we are. And happy to answer questions. If you guys have done gone through something similar, or if you have advice for me, I certainly am not the expert on this. I'd love to. Learn from what you've done.

And as your family's transitioned to different stages, how you've made sure that everybody feels like they're really comfortable and secure with where they're at.